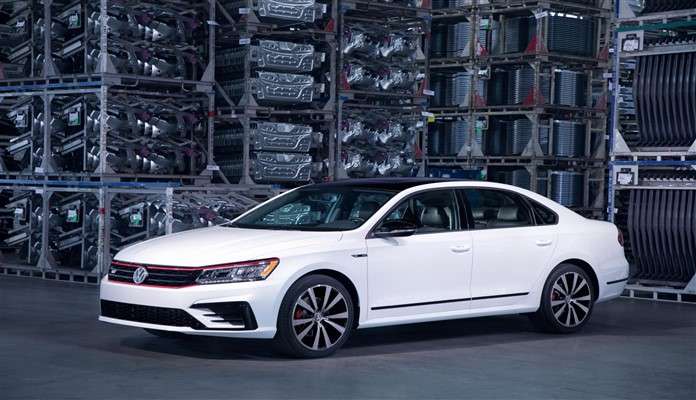 With the kickoff of the North American International Auto Show in Detroit automakers are strutting their stuff with new-car intros all over the place. Not to be outdone, Volkswagen has introduced a new Passat GT for 2018, based on the restyled Passat introduced last year.
Advertisement

When the new Passat joined the Volkswagen lineup last year, its reception was excellent. Designed as much with the North American region as its other markets, as well, the Passat's styling drew praise as did its interior comfort. Performance and handling were also noted, as well.

For 2018, Volkswagen has taken the Passat further by designing a Passat GT model, especially for the North American market. The new model debuted Friday at the opening of Detroit's North American International Auto Show (NAIAS). It is part of a major yearly industry rollout and marks one of the first major U.S. auto shows of the year. Automakers use NAIAS for major introductions.

First previewed as a concept at Automobility LA, in 2016, the automaker's North American engineering hub in Chattanooga, Tenn. designed the production model. The design team relied on feedback from U.S. customers and dealers.

Dr. Matthias Erb, chief engineering officer, North American Region, Volkswagen, told reporters at the debut that the new "Passat GT illustrates how the North American Region can shape Volkswagen vehicles" for the U.S. market. He explained that by combining a "local perspective with our global engineering expertise allows us to create" vehicles that meet the "needs of customers here."

The Passat GT joins the lineup as a limited-run model based on the R-Line trim. The Passat GT will be available in four distinctive colors: Pure White, Reflex Silver, Platinum Grey, and Deep Black.

The changes to the Passat GT start at the front. Borrowing from the R-Line®, the GT uses the R-line's bumper and adds a honeycomb grille, GT badge and red accent line – something akin to the performance-oriented Golf GTI. The GT's sports suspension has a more planted stance and aggressive look.

Looking at the GT from the sides, you notice the GT receives sporty touches from top to bottom. A set of black mirror caps and black window and door trim compliment the black roof, red-painted brake calipers accent the two-tone 19-inch "Toronado" wheels.

In the rear, the GT’s accents continue with a black spoiler and blacked-out LED taillights. The rear fascia includes black bumper trim and a double exhaust with an acoustic package.

The Passat GT features a Composition Media infotainment unit. A 6.3-inch capacitive touchscreen display and Bluetooth connectivity for compatible devices highlight the infotainment system. That, plus Voice Control and VW Car-Net® App-Connect technology that offers consistent smartphone integration with the major platforms – Apple CarPlay™, Android Auto™, and MirrorLink®. GT models also feature two USB ports, one in the center console and one in the rear seat console. SiriusXM® Satellite Radio is standard. A three-month trial subscription is standard.
Volkswagen’s proven 3.6-liter VR6® is the standard powerplant. The six-cylinder, whose power flows to the transmission, turns out 280 horsepower and 258 pounds-feet of torque. Using regular fuel, the engine delivers an estimated 19 mpg in the city and 28 on the highway. The six mates to a six-speed Tiptronic® automatic.

Plans call for the 2018 Passat GT to arrive at dealerships in the second quarter of the year. Pricing starts at $29,090 with an $850 destination charge.

Jesse wrote on January 16, 2018 - 3:36pm Permalink
Sure hope it comes with that stop/start engine feature so we can save the planet