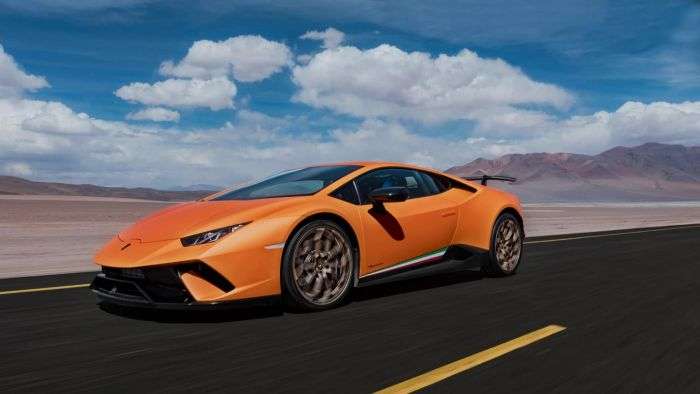 On paper, it looks as if the Lamborghini Huracan Performente should be the winner in a drag race, the reality just isn't the same.
Advertisement

There is performance, and then there’s performance. For example, there’s the type of performance that has a lightweight vehicle getting ready to try for the record at the Pikes Peak Hill Climb. Then, there’s the type of performance that has the McLaren 720S has on the track. Of course, it will run circles around most cars because of its available power. But what happens if you substitute drag racing for the more standard race track? What is the record, then? Indeed, how will the McLaren perform against a Lamborghini Huracan Performente?

You would think, wouldn’t you, that the vehicle with more power would be the winner, no matter what? Looking strictly at the numbers, the 720S's powerplant is a biturbo 4.0-liter V-8. The engine produces 710 horsepower and 568 pounds-feet of torque. A seven-speed dual-clutch tranny sends the power to the rear wheels. The McClaren 720S is the winner. Top speed is 212 miles per hour. Meantime, the Lambo sports a 5.2-liter naturally aspirated V-10. The engine turns out 630 horsepower and 443 pounds-feet of torque. A seven-speed dual clutch pushes power out to all four wheels. The Lambo’s top speed is 201 mph.
The Huracan Performente did well, but fell short.
Of course, the McLaren has a power advantage, it is obvious. But, the Lambo’s all-wheel-drive should help it get off the line more quickly.

So, guess what happens when the lights on the tree finish their countdown? The Lambo jumps out to a substantial lead, as you might expect. However, the McLaren puts on a display of playing catch up as it ropes in the many car lengths, ultimately passing the Lambo. The Lambo couldn’t match the McLaren. Though its engine is smaller by two pistons, the biturbo setup gives it much more power, 80 horsepower, to be exact. The 80 strength and its rear-wheel-drive ultimately proved too much for the Lambo. The McLaren did pass the Huracan and eventually finished well ahead of the Lambo.

At this point, the 720S has received some rave reviews. Drivers have noted its performance for a relatively affordable price. Yes, the $284,745 is way out of sight for most of us, however, for those who can afford the cost, it is entirely a supercar. Indeed, when you compare it to other supercars out there, it is the best deal.

Performance and Handling Called Out

Other venues have commented upon its performance and handling. The 720S has been “showered with praise for its engaging driving dynamics,” said Motor1.com. Interestingly, the 720S not only drives “circles around the competition on the track.” And, now, as it dominates at the regular track, it is also becoming known as a vehicle that will dominate at the drag strip, as well.