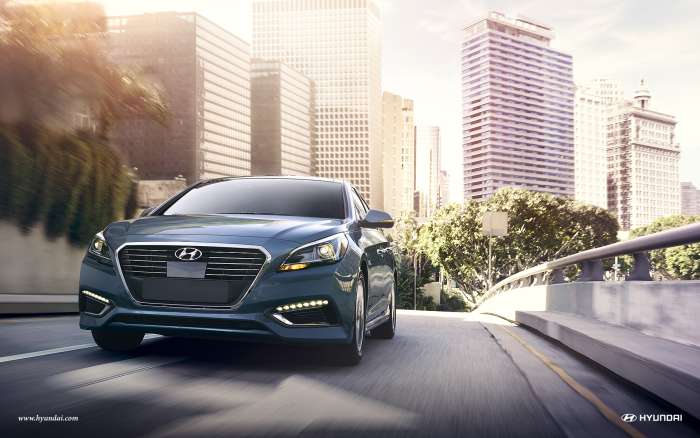 Following complaints of detaching sunroofs, Hyundai has recalled about 63,000 2015-16 Sonatas to fix the problem. The problem stems from the air deflector and its attachment point.
Advertisement

Hyundai issued the recall after receiving reports of sunroof panel detachments between March and September. So far, the automaker has received no reports of crashes or injuries that have been caused by the defect.

Following receipt of the complaint, the company launched an investigation. The probe found that the reason for the problem was related to the sunroof’s wind deflector. The deflector, attached to the front of the sunroof, is designed to help reduce wind noise.

In its filing with the National Highway Traffic Safety Administration (NHTSA), Hyundai told regulators that on some Sonatas, the wind deflector anchor plate might not be sufficiently bonded. “If the wind deflector becomes partially detached from its mounting points after the sunroof is opened, it can interfere with the movable sunroof panel while the sunroof is being closed,” the automaker told NHTSA.

In its filing, Hyundai also indicated there was a second way in which the sunroof can pop off and into traffic. If a passenger attempts to close it manually, the automaker said, it is possible for the panel to fly off into traffic.

Hyundai began a probe of the problem last March when it received the first report of an occurrence. There were no more complaints until August. About a month later, Sept. 28, Hyundai decided to recall the vehicles.

The Sonatas affected by the problem were built at Hyundai’s Montgomery, Ala., plant between May 28, 2014 and March 18, 2016. Webasto Donghee, a South Korean supplier, made the parts affected by this recall.

Hyundai will notify owners of the affected Sonatas by Dec. 2. After the notification, owners can bring their cars into their dealers for the free fix. Dealers will apply a revised bonding to the deflector.