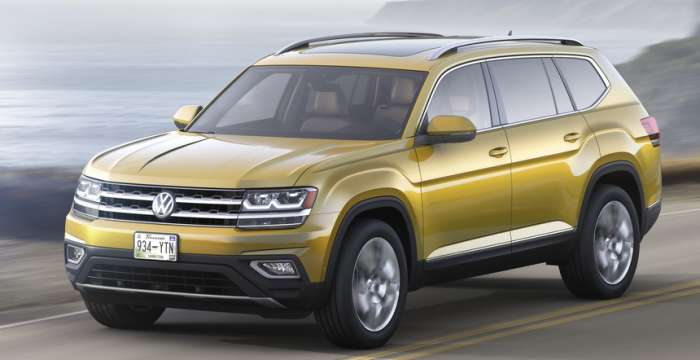 Here Is How VW’s Atlas Was Made For the U.S. Market

For three years, U.S. Volkswagen dealer had hoped the CrossBlue Concept that debuted at the 2013 Detroit Auto Show would be available in their showrooms. Their hopes will be answered in the spring when the America-only Atlas seven-seat crossover appears.
Advertisement

For some time, Volkswagen’s U.S. subsidiary has pushed for a unique crossover brand specific to its market. And, for the same length of time, Wolfsberg, listening only to itself, had responded with a model lineup that suits German and European tastes.

However, that picture is changing. VW is about to give many buyers exactly what they want as the American-made Atlas crossover made its debut a couple of nights ago in San Diego.

Bringing the seven-passenger crossover to market has been a three-year effort. Atlas is a direct descendant of the CrossBlue concept crossover that appeared at the 2013 Detroit Auto Show. Dealers lobbied for the concept vehicle, and now it is set to appear in showrooms in the spring.

The Atlas differs markedly from earlier VW crossover attempts in two areas: it sports a U.S.-only nameplate and size. It is a seven-passenger vehicle that is about the same size as the Ford Explorer.

The new crossover appears following years of starts, stops and flubbed tries by Wolfsburg, VW headquarters. For years, Germany believed its planning and development were good in all market. This thinking spawned the feeling that the U.S. would take anything Germany was right. For example, VW gave dealers the too-small Tiguan, which was also too expensive for its compact crossover niche. Then, there’s the larger Touareg, upscale and midsized. Some have called it better suited as an Audi, not a VW. For more information on Atlas, please see: Looking for a VW Crossover

It took a major scandal and rethinking, but, VW has, at last, realized the U.S. is different and needed vehicles that were unique to it. It is how Atlas was born. “This is the biggest and boldest Volkswagen we have ever built in the United States, delivering the distinctive design and craftsmanship we’re known for, now with room for seven,” said Hinrich Woebcken, chief executive of the Herndon, Va.-based Volkswagen Group of America.

The Atlas is bigger than any other Volkswagen on sale here. Cleanly styled, its lines are precise and nicely swept. Up front, the Atlas features LED headlights and LED Daytime Running Lights. The running lights create a unique front end signature. Optional LED taillights enhance the Atlas’ look.

Atlas is the VW Group’s largest model based on its MQB scalable platform architecture. VW uses the same architecture on the Golf and the next-generation Passat midsized, as well as the Jetta compact. The Atlas, at 198 inches, is just as long as the Ford Explorer, while it is longer than the Honda Pilot and Toyota Highlander. The trio of SUVs is considered Atlas’ primary competition.

Atlas has three-row seating. The first row is the two seats up front, followed by a bench for three and then the third row. The third row consists of two independently sliding seats. It can seat two adults.

The standard engine for the entry-level Atlas is a 238-horsepower turbocharged 2.0-liter four. The four is the standard powerplant of front-drive-only models. A 280-horsepower 3.6-liter VR6 is also available. Both engines mate to eight-speed, dual-clutch transmissions. A 4Motion, all-wheel-drive version is optional for all V-6 models.

Extensive Use Of Technology

The Atlas has an extensive standard technology suite. For example, it features Apple CarPlay, Android Auto and Mirror.

In the glitzy product launch, there were as many holes in the story as there were fillers. For example, fuel economy and many technical specs weren’t listed. There was also no pricing information, just some vague hints. The hints put it in the middle of the seven-seat crossover world. If that’s the case, then pricing should be somewhere from the low-$30s to the low-$40s for the all-wheel-drive version.