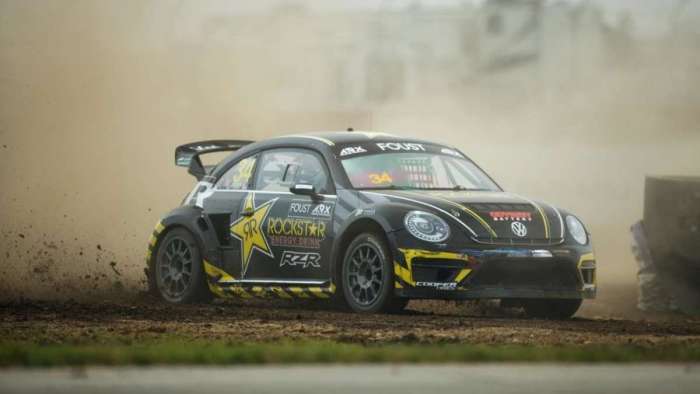 Tanner Foust struggled for two days this weekend to podium for the VW-Andretti Rallycross team. HIs efforts were good as he did take enough championship points to sit in second place,
Advertisement

It was a crazy racing weekend for the Andretti Rallycross racing team as their lead driver, Tanner Foust, earned an overall second-place in the provisional championship standings following the first round of the 2019 American Rallycross (ARX) Championship at the historic Mid-Ohio Sports Car Course.

Foust fought hard as he campaigned his No. 34 Rockstar Energy Drink Beetle in the two-day event. Ultimately the three-time rallycross champ finished first in a drama-filled Q2 race, where a touch before the first turn sent him spinning. Foust also took the top qualifier position after winning the Q4. However, after taking second in the semi-final, Foust fell to fourth place in the final. Despite the mid-pack finish, Foust managed to sit second in the championship standings.

The weekend was “topsy-turvy,” Foust said in a post-event interview. “We had some high moments – I had a great moment in Q4 and made a fun pass on the Subarus. The competition is strong, and the track did not” lead to “clean first corner racing,” the driver continued. “We had a great start in the Final following Scott Speed into the first corner. Chris Atkinson was in there and got a turn, and then the whole train came. Unfortunately, I got pushed back and stuck on his door fell back to last but came back to finish fourth. I still think that the VWs are the way to go and the cars to beat. There’s no doubt that the rest of the cars in the lineup have picked up the pace. It is going to be an incredibly tight season.”

Rookie teammate Cabot Bigham, who raced the second VW Beetle supercar, and Foust, who entered under the Andretti banner, were supported by Volkswagen R, VW’s performance division. While Foust had to work for his points, Bigham’s first day as a VW-Andretti driver, saw him finish seventh and fifth. He reversed those finishes on Day 2. He took last in the semi-final, which means he did not move into the final.

Bigham was unhappy with not making the final. He told an interview, post-race that he was “pretty gutted to not make the Final. It was the result of shaking the rust off from that long off-season outside of the car. The car was fast all weekend and deserved to be in the final, especially on the podium. I am already looking forward to Gateway and eliminating a lot of the mistakes that I made in the qualifying heats. As a result, we should have better starting positions for the Semi-Finals and hopefully never get eliminated from these Finals for the rest of the season,” the young driver continued.

“There’s serious competition between all teams and manufacturers,” Foust said. “Everybody is right there, or quicker, and it is going to be a heated battle all year long,” Foust concluded.

CBS Will Air A Delayed Race

Coverage of the Mid-Ohio round will air on CBS Sports Wednesday at 9:00 PM (ET).