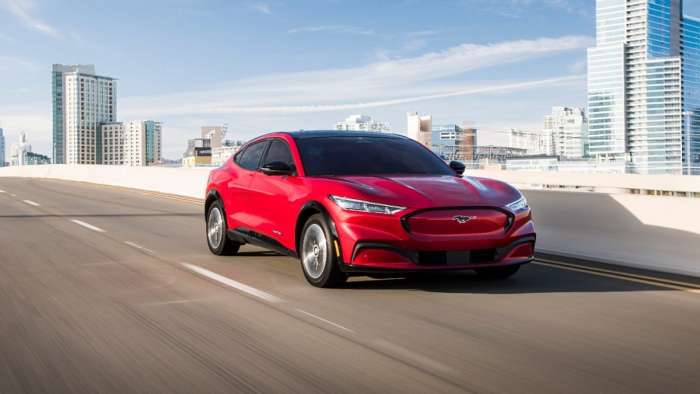 As vehicles become more reliant on car area networks, connectivity, and computers in general automakers have to be sure that software is up to date and not causing problems. That's why Ford is recalling a limited number of its hot-selling Mustang Mach-E crossovers to fix a potential problem with the computer code. Ford plans an over-the-air update.
Advertisement

At one time, when an automaker recalled a vehicle or series of vehicles, it was because a mechanical issue needed repair. At that time – maybe 35 years ago – microprocessors and other digital devices were beginning to appear in vehicles.

For instance, look at the pollution control system, starting with the EGR (exhaust gas recirculation) system and ending at the tailpipe. A series of individual processors controlled things and took readings like the barometric pressure and other related inputs. A single processor stored the inputs and made any changes that needed to be made. That was it as the processor was it as far as pollution control went. Similarly, other single processors controlled the few computerized systems at the time as each system was unique.

There were eight or nine underhood processors (controllers), keeping the info they gleaned to themselves. There was neither a bus nor a network nor even a master control module (now called the ECU or engine control unit), though, as noted, there were individual systems and controllers or processors.

The key to complete vehicle control had to wait until the vehicle's internal bus was figured out, configured, and connected. Internal automotive connectivity began in the late 1990s. The rush toward automotive connectivity was like water flowing over rapids in a river. In less than a decade, a new network, connectivity, and new software (essentially an entire network and system) was put into place. It was revolutionary.

Today vehicles are computers on wheels with as many as 18 or more major subsystems controlled by the ECU. You can understand why a system software problem is a huge deal. So, instead of a scenario where a single system, for instance, the exhaust manifold, might be causing foul-ups that result in a recall. Now, the car area network watches things, and if there is a problem, it reports it to the ECU, which, in turn, looks at the information and decisions about whatever issues may need correction. If not, the system generates trouble codes for technicians, so they have roadmaps as to what is wrong.

As you can see, the importance of the ECU and its subsidiary processors – the entire car-based computer system – have to work correctly from day one. If the software is messed up, there are problems for the automaker.

It is the reason for Ford's recall of some of its highly prized Mustang Mach-E vehicles. According to the National Highway Traffic Safety Administration (NHTSA), the Mach-E has a software problem that could cause unintended deceleration or a loss of power. As you can see, this could cause mega-problems for the vehicles involved and the manufacturer. So, Ford has recalled the Mach-Es.

Indeed, the automaker has recalled 464 Mach-Es due to improperly performing software. According to Insideevs, the software could "potentially 'ignore' the EV's unintended acceleration or deceleration." Further, the vehicle's computer system might not "recognize 'vehicle movement on the secondary axle'" or it might not "' detect a lateral hazard on the primary axle.'"

Documents relating to the recall show that "a software update that was intended for a later model year was mistakenly pushed to some 2021 Mach-E SUVs. The update is causing the car's software to incorrectly report torque figures at zero on the secondary axle," Insideevs noted.

As the publication explained that it "has been proven time and time again that unintended acceleration is exceedingly rare, and, in many cases, impossible. However, with new cars becoming much like computers on wheels and with a heavy emphasis on software, bugs and glitches are expected. It's good to know Ford discovered the issue and plans to fix it promptly."

Ford's answer to the software glitch is a "software update to the Mustang Mach-E's power control module. The recall specifies that the free software update may be handled at a Ford or Lincoln dealer, or buyers may be able to take advantage of an over-the-air software update, which wouldn't require a trip to the dealer. Ford plans to take care of the issue in May 2022."

Ford built the Mustang Mach-Es affected by the software issue between Oct. 3, 2020, and May 26, 2021. Ford began its notification of owners earlier this month, and the notifications will continue until the end of the month.