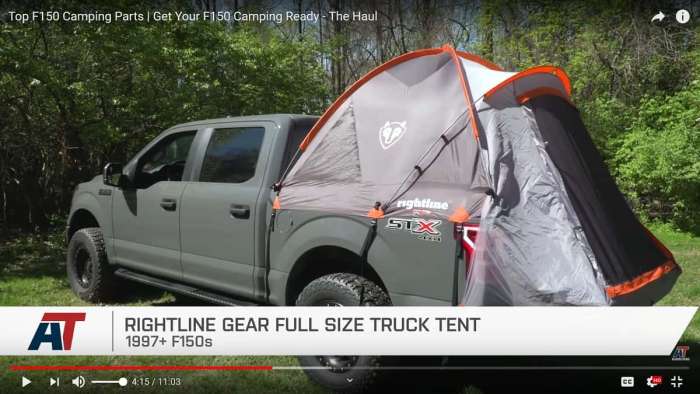 Are you ready for a camping trip in your Ford F150? If you are, American Trucks has eight pieces of gear that will make your trip lots better.
Advertisement

Way back in the days of dinosaurs and other such creatures, when I was actively camping a lot, it was pretty basic stuff: a couple of shelter halves that we snapped together to form a basic two-person pup tent; a campfire; insulated canteens for water; ice-filled Thermos® carriers to handle food; and the like.

Through the years, I continued to have gone on at least one camping trip with the family, and things have changed. The first change was the fact that I used a recreational vehicle, like the old VW Vanagon Bavaria, which slept four. Since it was an RV, it had cooking facilities; bath facilities, and so on. It was a far cry from my years of camping as a kid. I think the last RV-based campout was nearly 30 years ago, an age ago in camping terms.

You can imagine my amazement when I was watching a YouTube video by American Truck, which showed a few really neat items that are available for your Ford F150 pickup. The items included a neat front-seat fridge from ARB; a nice, affordable compressor from Smittybilt, and then there’s an there’s the Rightline Gear Ford F150 Pickup Bed Tent and Air Mattress. Next, up, there’s underseat rear seat storage made by Huskey that offers additional spots to organized smaller items under the rear seats. Then, there’s the Jammock, bed cover that keeps your stuff right where you want it. It also serves as a sleeping space, if you can get it, finally, for fun, a version of Tailgate Pong. All of these very nice offerings come as additions to learning the basics of properly loading your Ford F150.

Let’s look at each item:

ABR RefrigeratorThe ABR refrigerator is an 82-quart unit. Capable of operating on battery power from the Ford F150, the unit also can run on standard electricity from an outlet. Access to the controls is via a digital input/display panel at the top front of the unit. At 37-degrees, it draws about one amp of power and keeps your food continuously cool. The great thing about this unit, says American Truck, is it frees you from the worry of having to resupply your cooler with ice in the morning, which is a drawback.

Divided into several compartments, you can store your water in an easily accessible area of the unit so you can get it quickly. There’s a separate fruit/dairy section. As Justin Dugan, spokesman for AT, says the ARB refrigerator means there will be “no more soggy sandwiches.”

Smittybilt Compressor Why does it seem that every time you head out camping or offroading through some backcountry that something goes flat? Whether it’s an air mattress, floating mattress, or basketball, they all need refills with air, usually in some of the toughest places on your trip. The 72-liter-per-minute compressor isn’t the quickest on the market, but it will handle its load quite nicely.

One of the really bad problems your Ford F150 can face, especially if you are running 35-inch tires, is a tire with a slow leak. Most of the time, tire patch-in-a-can will handle the leaking problem. All you do is attach the spigot to the tire’s air valve, and it’s all set as the sealing material goes to the leak, fills it in, and sets. Unless the can also includes a shot of air to bring tire back up to the proper pressure, you could find yourself with a seriously underinflated tire. Underinflation can seriously damage the tire as it can get overly hot, which can weaken the sidewalls and tread. The Smittybilt Compressor is perfect for this chore. Though it runs at a rather modest speed of 72 liters-per-minute, it will still easily fill the 35-inch-wheel mentioned. It may just take a bit longer than normal. 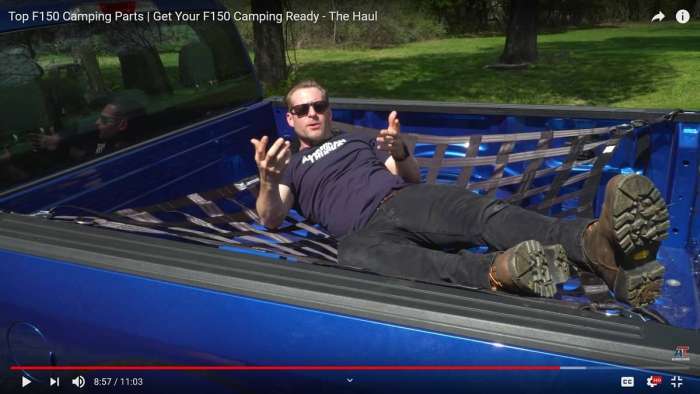 For less than $100, the Smittybilt Compressor is a much less expensive alternative to a built-in compressor system. Though far more convenient, the built-in systems available are more expensive than the Smittybilt unit. However, the built-in systems are for folks who are out there most weekends doing something, whether it’s bushwacking, camping, using trail bikes or motorbikes, and more. They are also susceptible to damage if you the trails you are running over are particularly rough. The Smittybilt Compressor, since it is a plug-in unit, is much more convenient when it comes to inflating things like air mattresses or floats. The Smittybilt Compressor is a major hit to the electrical system since it runs at 30 amps. You will quickly drain the battery unless you keep the engine running. It does come with a 24-foot coiled hose, which should cover most of your Ford F150 pickup.

One of the drawbacks of using a tent on a camping trip is the fact that you do have to put it up on the ground. No matter what type of ground cloth is available for the tent, it always seems that you end up sharing your tent with all sorts of tiny visitors and multi-legged tent-mates. The Right Line Bed Tent makes use of your Ford F150’s bed, rather than the ground. In one move, you take your tent off the ground, so not only are you not sharing it with any creepie-crawlies that might be lurking, but you also are dry because you aren’t setting up on the wet or damp ground. Rightline Gear Available For Many Pickup Lines.

The tent, itself, has a couple of features that to note. First, the tent features a full set of roof-style vents for air circulation. Open to the sky, you not only get a strong flow of air, but you can also look at the night sky, which is always worth the price of admission. And, the interior features a lantern hanger that will fit an add-in lamp. If the weather turns nasty, the tent also features a set of vent covers that are easy to install and will keep you dry. And there are a couple of side-mounted storage pockets.

Huskey Under-Seat Storage Though not made for strictly for camping, American Trucks recommends the Huskey Under Rear Seat storage to help keep things organized. For $100 to $150, depending on the model selected, the Huskey bins give you places to store lots of items that might otherwise be jumbled up in the rear seat or on the rear floor. For example, you can easily find storage for recovery gear, if you are planning to go offroad, or you can store a complete set of bungee cords to help organize other items. You can even store first aid gear. Made specifically for the Super Crew or Super Cab models, you will have to remember to order the correct items.

Surco Storage BinThe all-steel Surco Storage Bin adds to the amount of storage you will need for your trip. Like it or not, your best efforts at planning for space use fall short as everyone seems to bring an extra rucksack or carry bag. Quite quickly, the standard storage spots fill up, which is where the Surco Bin comes in handy. Made to take advantage of your trailer hitch, it slides into the trailer hitch receiver. The receiver hitch pin secures the Surco Bin.

Capable of storing up to an added 500 pounds of gear, you can easily carry added food, coolers, gear bags, and other miscellaneous items.

JammockYou might wonder what Jammock is? It is a good point. It’s a webbed bed cover that helps keep your gear in one spot. It also serves as a hammock when you’ve emptied the truck. Capable of holding 300 pounds, the Jammock fits in the stakeholders of your Ford F150 pickup’s truck bed.

--Tailgate PongWhile drinking games are fun on a camping trip, you do have to remember to watch out to make sure no one drinks and drives. Tailgate Pong is one of those popular games; it breaks lots of ice so that people who didn’t know one another become friends. Though usually played with beer, there’s nothing wrong with playing it with juice or Coke or, even, water.

Marc Stern is Torque News Ford F150 Reporter. You can contact him at @iraradioguy on Twitter. Please feel free to leave your comments about his stories in the space below.