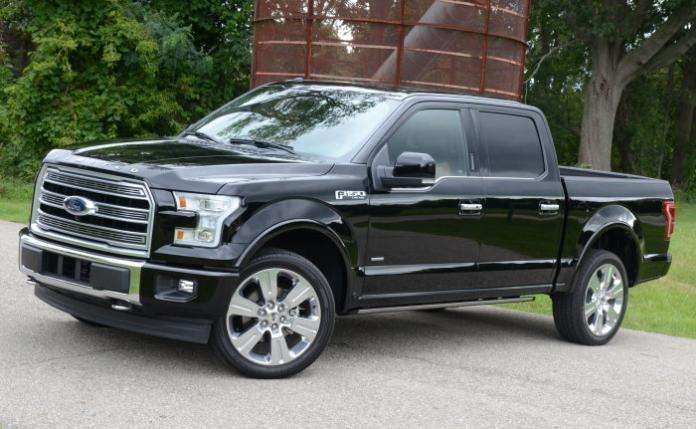 The 2017 Ford F150 Limited is the top-of-the-line trim for America’s bestselling half ton truck, combining the impressive performance of the F150 lineup with an interior layout that is more common in a large premium luxury SUV.
Advertisement

The 2017 Ford F150 Limited is an awesome truck, but it is not for everyone. My test vehicle had a sticker price of exactly $67,000, which some people consider an insane price for a half-ton pickup, but for that price, you are getting the best performance parameters of the F150 lineup and a true premium luxury feel inside and out. I would say that the F150 Limited interior is like something that you would see in the likes of the Lincoln Navigator, but honestly, that might be selling this truck a bit short.

Driving the 2017 Ford F150 Limited
The 2017 Ford F150 Limited only comes with the 3.5L EcoBoost V6 and the 10-speed automatic transmission. With 375 horsepower and 470lb-ft of torque coupled with the low gearing of the new 10-speed, this F150 is impressively quick. When you stomp the gas from a stop, there is just an instant of hesitation while the turbochargers spool up and when they do, the F150 moves out from a stop to well above any posted speed limit in a hurry. Those acceleration capabilities are just as impressive when cruising at speed and asking for more, so in pretty much any driving condition – this F150 is quick. In addition to being quick for a full-size truck, the 2017 Ford F150 Limited is capable of towing more than 10,000lbs and hauling more than more than 2,300lbs. I spent some time with the F150 Limited hooked up to my two-horse, 5,500lb trailer and it handled that load beautifully, pulling the trailer effortlessly with all of that EcoBoost power. Also, with 700lbs of bagged horse grain in the bed, the performance of the F150 Limited was barely affected, so this is a truck that can tow and haul with the best in the class without any concerns.

In short, the 2017 Ford F150 Limited with the 3.5L EcoBoost V6 and the 10-speed automatic transmission is a blast to drive and all of that power translates into a truck that will pull and haul as well as any half-ton truck sold in America.

However, you can get similar performance from any new F150 with the 3.5L EcoBoost V6 and every other truck will cost you less – sometimes considerably less. This isn’t a truck that you buy based strictly on power and performance. This is a truck that you buy when you want the best performance in the half-ton segment, but you also want a premium exterior look and a cabin that is straight out of a high-priced European luxury SUV.

A True Premium Luxury Cabin
The crown jewel of the 2017 Ford F150 Limited cabin is the gorgeous two-tone seats with unique super-soft leather in the front and rear. The front seats are heated, cooled and feature 10-way power adjustment while the rear outboard seats are heated. These seats look great, the leather surface has a very upscale feel and when you sit down, these seats cradle the driver and front passenger like a piece of expensive living room furniture. The rear outboard seats are also far more comfortable than your average rear truck seats with a bucket-like contour and plenty of leg and head room for taller passengers. The two-tone design of the seats is continued through the center console and the door panels, while the steering wheel and portions of the dash are wrapped in premium black leather with contrasting stitching. Finally, in addition to bits of bright polished trim throughout the cabin, the Limited trim line has premium wood trim on the doors, punctuating the luxury feel of this package with a unique Limited badge on the center console with the VIN and serial number. In addition to the 8-inch screen in the center stack, the 2017 Ford F150 Limited also includes an 8-inch screen in the gauge cluster. This screen offers a wide variety of information ranging from trip/fuel economy data, navigation commands, a variety of gauges, the integrated trailer brake controller adjustments and the Truck Apps, with unique gauges that display vehicle angle.

Of course, the 2017 Ford F150 Limited has features like keyless entry, push-button start, a backup camera, adaptive cruise control, the Pro Trailer Backup Assist system, remote start and a long list of safety gadgets like blind spot monitoring, lane-keep assist, reverse sensing and adjustable driver’s pedals. There is also a premium Sony speaker system and a gorgeous dual-pane panoramic roof, so when you put together the whole package, there really isn’t anything that the F150 Limited doesn’t have that you will find in a European luxury SUV.

The Final Word
The 2017 Ford F150 Limited packs big power and impressive capabiltiies, but so do many of the other current F150s in the lineup. Where this Ford truck stands out is in its cabin, chock full of premium luxury features that would have been unheard of a decade ago. If you want a power, capable Ford F150, every trim line can answer that demand, but if you want the most capable F150 with an interior which would fit just as easily in a premium luxury lineup – this is the truck for you. If you are considering a hard-working truck for the daily grind and a luxury SUV for time away from the workplace, you can get the best of both worlds in one truck, as the Limited package is a work truck in premium luxury clothes.