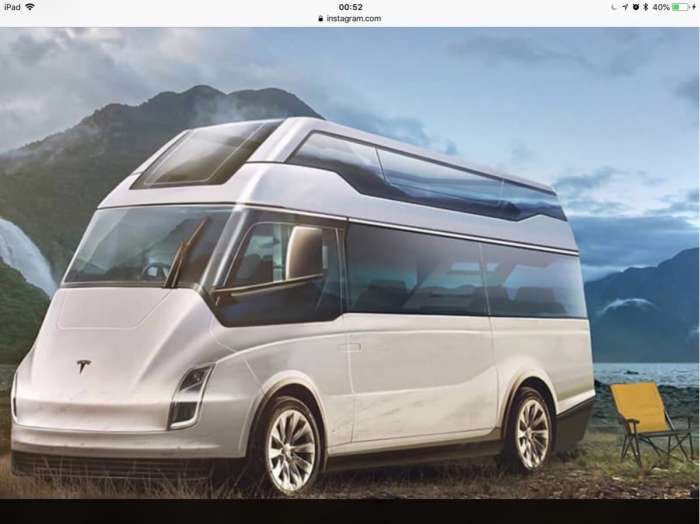 Recently a Spanish designer based in Madrid created a rendering of a Tesla Semi Class 8 Tractor heavily modified to be an RV camper. He then posted it on Instagram. It instantly went viral and caused such a frenzy on the Internet to bring to the imagination the possibilities of such a vehicle that Tesla could make.
Advertisement

A company in Madrid posts a picture on Instagram of an illustrated rendering of a Class 8 Tesla Semi in RV configuration and livery. With that picture embedded below, there are other Tesla dreamers out there on the Internet who’d like to make the world’s most famous but non manufactured handful of one-off electric tractors into something that you can park out in the great outdoors, pop a cold one, sit back, and relax.

Glossary: According to the Department of Transportation's Federal Highway Administration (FHWA),

A Class 2 vehicle is classified as a light duty truck, like the Ford F-150 Pickup.

Now that we are starting to see more freshly made Model 3s inside the recently made more tinier parking lot of Tesla’s Fremont Final Assembly Plant right by the miracle tent, people are now ready to move on past wondering if Tesla will still survive, and the faithful and positive believers are back to contemplating the possibilities of what else Tesla could make. People’s hearts started drifting back to that Semi, others, to the Model Y. But nothing was really mentioned about the Semi lately, as much as Elon Musk, the Tesla CEO, recently brought the national conversation back to the Tesla EV Pickup Truck. Not that one, this new one.

The original version he brought into the lexicon last year was an illustrated concept of a large pickup truck based on the Semi bobtail cab with the fifth wheel removed, and a reinforced chassis so that it may hold a large pickup bed with heavy cargo, possibly hydraulic tilts to drop a vehicle, a “pickup that picks up,” as he said something to the effect. Although he didn’t say it, he left the impression that this truck would compete more with a larger GMC Topkick as opposed to a Ram 1500 or the legendary Ford F-150. Well, that was then. This is now.

With a Twitter gathering of his followers he asked them what they would all like in an EV pickup truck and some gave him a wish list. A backup battery inside the frame behind the cab was one of the more clever ones. And with that the idea of what a Tesla Pickup Truck should be, transformed from a tractor cab monster tow truck into a Ford F-150 segment fighter, to take on what has become a four decade institution, best seller in class inside the truck range of the Ford portfolio. With that in mind, Tesla is going to take on Ford in one aspect that Ford has never done to the F-150. And based on their hybrid and EV car offerings, some of which faced failure, Ford has failed to do on their trucks: make one full electric pickup truck.

But with that, it seems that the Tesla Semi will have to find other things to do besides tractor trailer and pickup duty once production is underway, because if Elon is serious, he’ll need to come up with a separate and different fresh purposed design to take on the competition. From Class 8, Elon dropped his vision down to Class 2 light duty pick up truck. Maybe with Topkick, but Semi can’t do Class 2 as she is in that F-series segment, she’s way too big. And this is where the story becomes more interesting. What else could the already iconic electric tractor that can do, do, besides haul trailers?

Just a few days after the pickup reset, a Spanish design company in Madrid posted an illustrated rendering of Semi in Class 8 form as a RV Camper mobile home. It went viral and you see it on this page above.

It seems Madrid Motors was not the only ones who had sights on some kind of Tesla motor home concept. Trevor Goodwin of YouTube’s GIFT 4000 Channel has a few renderings of an even longer camper coached Tesla Semi in different colors and flavors. In his video, he gives a serious profile to what a Tesla motor home would be like on an unlimited budget. Features like a separate battery pack/long battery tray underneath the entire rig, so that the range would double increase to 1,000 miles. Megacharging capability to get a tractor recharge done much faster. Roof turbines so that for every 10 hours of drive time the rig would accumulate 30 kW of walk around the house energy. You can’t recharge while driving. That’s a feature he’d like to fix with Tesla.

And there are other companies already in the motor home business that are starting to electrify their offerings. Winnebago a few months ago rolled out a new EV on a Winnebago Class A RV platform, offered in 33-foot and 38-foot lengths with a Gross Vehicle Weight Rating (GVWR) up to 26,000 pounds. Range options are either 85 or 125 miles. Now you can tell from the ranges, this vehicle is not suited for camping, but Winnebago also makes these vehicles for commercial use. So this rig is perfect for a public safety temporary command post, ambulance or a temp hospital, mobile office, or a food truck. Eventually a variant will be used for camper duty I’m sure. What Winnebago is doing is stretching their legs first with the commercial customers, to get a sense of what works and doesn’t, so that when they get to the campers they’ll have a better idea of how to serve them, what works, especially for EV camping and off grid living.

So by trying to put Model 3 “production hell” behind them to move on to other business, by reframing the truck concept and closing the door to one duty the Tesla Semi won’t perform, Tesla opened other doors to the possibility of Semi becoming an EV RV. It is doubtful that Tesla will ever enter the RV business. The RV business is a dragon I don’t think Tesla can slay, or even wants to slay, as it is more than about just making the EV cab for the camper. That business is also about having the knack to know how to furnish, decorate, and supply it appliances and electronics as well. And Tesla already has problems making cars, campers is another Pandora’s box that they should stick to what they know.

That said, what Tesla can do, however, and would be very good at it, is making the EV vehicle and vehicle cabs and front ends and chassis for those campers, and then ship them off to manufacturers like Winnebago. So if you want a Tesla based EV camper, the ones you have kick and scream to is not Tesla, it’s businesses like Winnebago, Wanderlodge, Airstream, Gulfstream, etc. that can do this. And they will buy Semi’s face and guts to make her the happy camper of your dreams.

What do you think? Let us know your opinion in the comments section below for discussion please.

Adolfo wrote on April 28, 2019 - 4:07am Permalink
More importantly always effort to think many marketing approaches to gain a great deal more exposure. Seek assistance from professional to obtain help on marketing strategies to attract potential customers.
Ricardo Defazio wrote on July 7, 2019 - 4:21am Permalink
A Cargo van ( no windows ) about the dimensions of the Madrid concept, or a cutaway cab, that you could add a contractors box to. The extra battery idea is a great one I think, to increase your range to 1000 miles. Wow, I can dream if I want to, because it's not impossible.