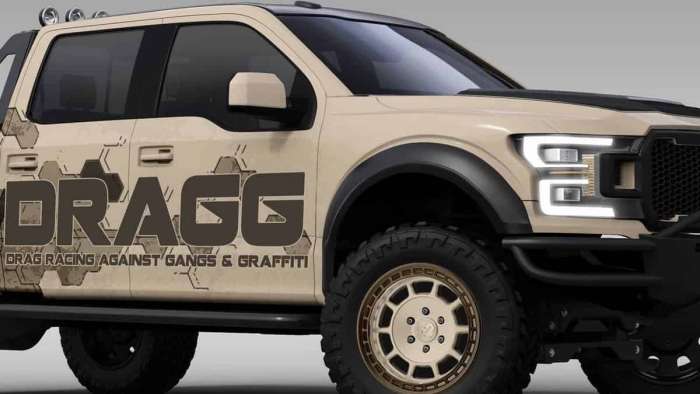 There's a lot to be said tor DRAGG's Desert Defender Ford f150, especially if it sets kids on a path toward the car industry as a future. That is the reason the Desert Defender exists. It shows what can be done. That it also is a cool truck, well, that's just gravy.
Advertisement

You know what a drag is, don’t you? For most people, it is doing something they would rather not be doing. Well, do you know what a DRAGG is? If you are into trucks, then it is probably something you would rather be doing. We would, anyway, but that’s another story. In this case, DRAGG stands for Drag Racing Against Gangs and Graffiti. It’s aims are laudable.

Specifically, DRAGG is a non-profit, youth-oriented, afterschool program that seeks to encourage young folks to focus on the auto industry as their future, as opposed to other things. DRAGG gives kids access to potential new lives, taking them far from the street life they may have lived. Using vehicles this way is a benefit. Let’s look at what DRAGG does.

Recently, DRAGG created its Desert Defender Ford F150. The DRAGG Desert Defender is a Ford F150 that started as a humble F150 Lariat Sport SuperCrew 4X4, but after lots of tweaking, the true nature of the pickup shown through. The process of creating the Desert Defender was much like that of the sculptor who famously said noted that each of his masterpieces was there in the marble waiting. He said he chipped away all of the unnecessary parts, and the masterpiece revealed itself. Likewise, the Ford F-250 Tremor model is just flexible as Ford's Other SEMA entries like Rangers and F250s.

Where Does It Come From?

Granted, the artist’s statement was more fanciful than not, but it did make its point. There is a form in everything; you have to find it. DRAGG did find it and more in the Desert Defender. Indeed, the DRAGG Desert Defender will be a featured conversion at this week's SEMA show in Las Vegas. Indeed, there are other vehicles that are also special SEMA models, like the number of Rangers that will be shown as SEMA Ranger concepts that show how flexible the mid-sized truck platform is.

Powered by Ford’s 5.0-liter Ford V-8, the developers dropped in a Ford Performance Supercharger with TVS technology to give the pickup go-power. And, the truck has a cold-air intake and cat-back exhaust with black chrome tips by Borla to improve performance.

Six-Inch Lift Is No Small Matter

Some Of The Desert Defenders Tricky Bits

A Federal Signal police lighting package by West Coast Lights & Sirens and Diablo bumper shackles by Mojave Parts are also parts of this unique Ford F150. And, inside the DRAGG Desert Defender Ford F150, you will find a Ford Accessories subwoofer and amp by Kicker Audio, body-color trim accents, and a police radio system.

Tesla-Funded Research Reveals One of The Biggest Mysteries of EV Battery
Tesla Tesla Buyer Nets a Whopping $12,000 Discount After Asking for Reduction
END_OF_DOCUMENT_TOKEN_TO_BE_REPLACED