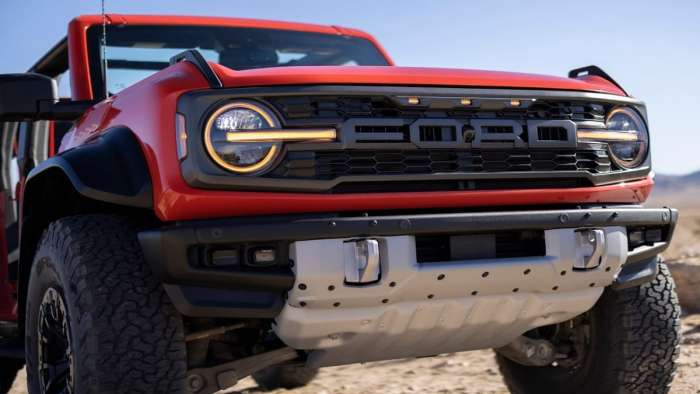 Ford Bronco Raptor Will Crank Out 418-Horsepower, 440 lb-ft of Torque

When the Bronco Raptor was debuted last February Torque News, like other publications, speculated about just about everything to do with the specialty SUV. Though we thought that, based on information about other models from Ford that used the same engine, the power would be in the 350 to 400 horsepower range, we didn't know exactly. Now, we do.
Advertisement

When an automaker reveals something about a sought-after vehicle, the carmaker, at least, is ready to publish final or almost-final details about the vehicle.

Not so the Ford Bronco Raptor, which was detailed in Torque News last February. We detailed most of the vehicle, but one thing that eluded us was the final horsepower specs of the specialty super SUV. You would think that automotive outlets would have first dibs, so to speak, on things like the Bronco Raptor's total horsepower.

Instead, we did the best we could to estimate things based on stories that appeared at the time. It looks like we were in the ballpark as we noted the output of the 3.0-liter twin-turbo V-6 that powers some of Ford's more powerful offerings.

So, we decided to wait until Ford offered the official horsepower listings. We had expected them to be in the form of a press release or a Ford featured news release. As noted, we had thought the power output of the Ford Bronco Raptor would be in the vicinity of 350 to 400 horsepower because that is the range usually given to the standard twin-turbo V-6. However, we were surprised this week when Ford revealed the power specs in a tweet from Jim Farley, Ford CEO.
Farley's reveal put the Bronco Raptor's power spec at 418 horsepower with 440 pounds-feet of Torque.

Muscle Cars and Trucks (MCT) also noted Farley's tweet and comment that the 418-horsepower figure is "a significant step up from the next engine option down the Bronco line, the 2.7-liter turbocharged V-6. That option turns out 330 horsepower and 415 pounds-feet of Torque.

As MCT noted: "What's important to note here is that the Ranger Raptor that will be arriving in North America next year will also feature the same 3.0-liter twin-turbo V-6 engine and will be built under the same roof as the Bronco Raptor." So, MCT, speculated, that this "could mean that the upcoming off-road midsized truck could see similar power figures as the baddest Bronco."

As MCT commented, quoting MotorAuthority's interview with Jack Cooper, Ford Bronco Raptor Advanced Systems Engineer, who noted that the Bronco Raptor should "be able to reach speeds of 111 mph on just about any terrain, while the top speed of the SUV is limited to the rating of the tires."

Further, MCT noted that the "vehicle's suspension setup allows for 13 inches of front travel and 14 inches of rear travel, ideal when going on bumpy terrain at such thrilling speeds. In addition, the Bronco Raptor features 37-inch BFGoodrich KO2 tires helping give the SUV a total of 13.1 inches of ground clearance." This is 4.8 inches more than a base Bronco and "1.6 inches more than a Sasquatch Package Bronco."

MCT notes that Bronco Raptor isn't any friend of fuel economy, something of which buyers should be aware when they plunk down their hard-earned cash. "Of course, the size of the vehicle, along with its massive tires, doesn't do fuel economy any justice, and owners will be looking at spending a couple of thousand dollars just on fuel for the 'BRaptor.'" This is "on top of the starting price of $69,995 … but we think it's well worth the expense."

If you are thinking of ordering a Bronco Raptor, you should be aware that orders are closed for the rest of the model year 2022. So, you probably won't be taking delivery of your Bronco Raptor before sometime next year. Those lucky enough to have already ordered the Bronco Raptor will probably be out there bushwacking in the outback on various trails and roads once the owners take delivery of the first round of Bronco Raptors this summer.