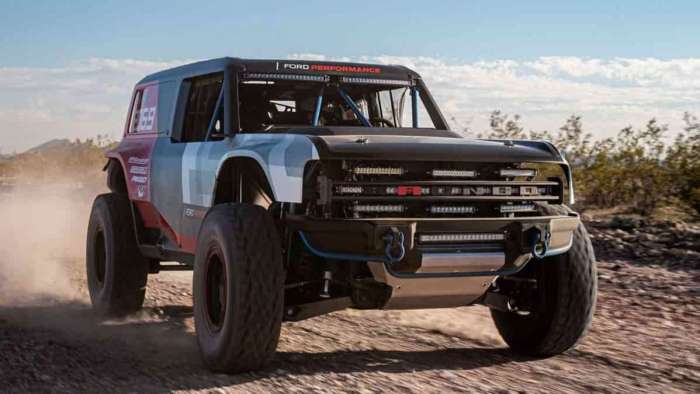 When the green flag drops later this month and Baja racers disappear in a huge cloud of dust a vehicle that looks back but is also the future will take part. The Ford Bronco R will be there looking for another win, just as it did in 1969. The Ford Bronco is the only 4X4 truck to have taken the Baja 1000.
Advertisement

Half-a-century ago, Ford’s Bronco delivered a victory in the Baja 1000 race. It was the first and only time a 4X4 truck won the grueling overland test. And, when the green flag falls on the next Baja 1000 later this month, there will be another Bronco – a one-off Ford Bronco R – amongst the starters. It will be wearing livery inspired by the 1969 racer. The winning 1969 driver was Rod Hall.

In newly released images from Ford, the Bronco R features compressed body height. It also features a long-travel suspension. The composite body has a clamshell hood plus roof and body panels that are a retro look to remind fans of the first-generation Ford Bronco, made from 1966 to 1977. As noted, this version of the Bronco is race-ready, although it is a one-off build.

Inside, the three-member Baja racing team will sit on lightweight racing seats from Recaro. Also, the instrument panel surfaces echo the first-generation Bronco. Though the Bronco R looks back at the first-gen SUV, there’s nothing old about the data system. The Baja racer uses a MoTeC data-acquisition for real-time monitoring.

As it is picking up data, the Bronco R will be taking part in one of off-road racing’s most grueling and punishing events. Over the last 50 years of the 1,000-mile race, up to 50 percent of the participating race vehicles end up in the DNF (Did Not Finish) category because of the terrain. Vehicles are, more often than not, sidelined with broken axles or suspensions. Or, they may throw a half-shaft by coming down in a rough patch at just the wrong angle. Many times, the racing machines also end up broken by crashes into trees, rocks, or holes.

The Baja 1000 is an open-class race. It is open to many different types of off-road vehicles, from motorcycles and dune buggies to full 4X4 trucks like the Bronco R.

Development of the Bronco R was a partnership. Ford Performance collaborated with Geiser Brothers Design and Development and legendary Baja 1000 Trophy Truck champion Cameron Steel. Interestingly, while the racing truck’s design does pay homage to the Bronco’s heritage, the proportions and many design features will likely show up in the Bronco when it appears in the spring.

The prototype racer mirrors the upcoming Bronco. The racing truck uses a modified Ford T6 architecture as its basis. The same architecture will the basis for the production model.

The racer has a huge suspension travel of 14 inches. It uses 17-inch beadlock-capable wheels, and 37-inch BFGoodrich tires.

Tesla-Funded Research Reveals One of The Biggest Mysteries of EV Battery
Tesla Tesla Buyer Nets a Whopping $12,000 Discount After Asking for Reduction
END_OF_DOCUMENT_TOKEN_TO_BE_REPLACED