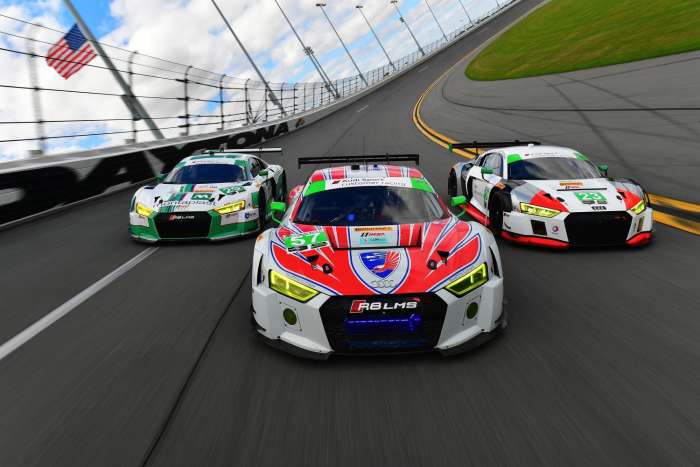 Audi Motorsports has fielded three independent teams that have been given factory-backing as they campaign their R8 LMS supercars.
Advertisement

When the 55th edition of the Rolex 24 Hours at Daytona starts out Saturday, the racers will follow an Audi R8 V10, the official pace car of the event. The race is the first round of the Tequila Patron North American Endurance Championships (TPNAEC). Some 27 GTD entrants will compete in the event.

Audi has been successful in this event winning in 2013 and 2016 in the GTD classes. The race over the 3.56-mile Daytona Speedway Road Course puts entrants to the test. There will be three Audi teams in the event, defending the manufacturer’s championship. The Audi teams will campaign Audi R8 LMS models. They are running to defend the TPNAEC and Weather Tech Championships.

The Audi teams entered in the inaugural race of the 2017 season are campaigning the all-new Audi R8 LMS. The R8 LMS won its U.S debut at the 2016 Rolex 24 at Daytona. It also clinched the Manufacturers championships in GTD for both TPNAEC and WeatherTech.

For 2017, the Audi R8 LMS returns to the Rolex 24 at Daytona to defend its title, using three cars. Stevenson Motorsports and the Audi Tire Center get back to the fray with one Audi R8 LMS. They plan a full-season effort.

Audi co-developed the all-new R8 with the all-new GT3 race car, the Audi R8 LMS in 2016. It is the first time the automaker did this. Thanks to the cooperation between race car engineers, motorsports specialists and developers, they created a vehicle that is 50 percent street car and 100 percent Audi, the company noted in a news release.

The R8 and GT3 share many common parts including the V-10 engine, as well as new ASF ® construction that uses innovative lightweight multi-material construction. The R8 also features design cues that show its racing heritage. For example, the R8 features prominent wheel arches and vertical lighting design, both of which suggest the R18 LMP1 race car.

It all began nearly a decade ago when Audi introduced the Audi Sport customer racing program. For the first time, individual motorsports customers could race cars designed for the track. Since it began, the success of the R8 LMS has been significant in GT3 racing. There have been multiple victories in the Pirelli World Challenge since 2012.

While the current R8 LMS is all new, its potential was hinted at the 2015 24 Hours of Nurburgring. Later, the R8 LMS took the 2016 IMSA WetherTech season, including the Manufacturer’s Championship on GTD. You can learn more at Here's a look at Audi's Motorsport effort for 2017.

If you want to watch the race and cannot get there, here’s are coverage plans: