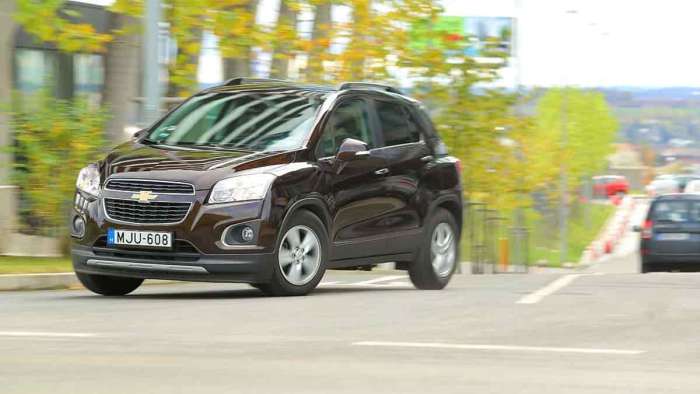 For the second time this year, Chevrolet has recalled a number of its subcompact SUV Trax models to replace faulty front control arm assemblies.
Advertisement

For the second time in six months, Chevrolet’s subcompact SUV, the Trax, has been recalled for suspension issues that could lead to crashes. So far, Chevrolet has recalled nearly 300,000 of the unique-looking SUVs.

At issue is the Trax front suspension. The rather jaunty-looking Chevy subcompact SUV looks as if it should be a nimble-handling vehicle. With a relatively short wheelbase, the Korean-made subcompact SUV seems as if it should be able to handle most roads well, but, according to various reviews, the Trax looks rather primitive as compared to its corporate cousin, the Buick Encore.

Its 1.4-liter turbocharged powerplant seems to strain most of the time. Its performance leaves a lot to be desired. Imagine a subcompact SUV that takes what seems like an eternity to achieve cruising speed, and you have the performance of the Trax. Also, mileage isn’t up to what you would expect. The sleekly rounded Trax looks as if its fuel economy should be in the upper 20s to low 30s. Instead, the powerteam is hard-pressed to return 25 mpg. Reviewers found this fuel economy troubling.

Its ride is jarring. Indeed, each of this year’s recalls speaks to what could be a vital part of the issue, a harsh ride. Such a ride puts added stress on suspension pieces, and if there may be parts that are predisposed to breaking, such as the front control arm assemblies, then the ride could make the recall a likelihood. The jarring ride of the Trax indicates the suspension is taking a beating, which leads to the issue, the failure of a weld on the control arm assembly. The failed weld means that the control arm assembly will fail, leading to the separation of the construction and possible crashes. To remedy this problem, Chevrolet has recalled 100,000 2015 to 2018 Trax models for testing and repair.

Chevrolet and General Motors have been busyrecalling millions of vehicles for brake issues.

Problem May Cause Partial Wheel Collapse

If the control arm assembly weld fails, the front wheel assembly can cause a partial wheel collapse which, in turn, forces the Trax to crack up.

For further information, contact Chevy Customer Service at 800-222-1020 and ask about recall number A192261870. You can also check the National Highway Traffic Safety Administration’s (NHTSA) safety website NHTSA auto safety website.. Or, you can contact the agencies recall hotline at 888-327-4236. The NHTSA recall ID is 19V652000.

Watch for news about the various truck and SUV lines, such Ford Rangers and F150s and Chevy Silverados and Trax models here. Click To Subscribe To Torque News YouTube Channel For Daily Ford and Automotive Industry News Analysis.

Last April, the automaker took care of the first recall for this problem. At that time, Chevy called back 200,000 2017 to 2019 Trax models for the same issue. The first recall’s ID was 19V319000. Work on the recall began last June. The remedy is the same as the current recall’s fix. Techs will check the front right and left control arm assemblies for the damage. If the tech finds damage, Chevy will swap out the affected control arm assembly for free.

For more information, you can contact Chevy Customer Service and inquire about ID A182202370.

Source: National Highway Traffic Safety Administration (NHTSA). This agency is one of the more responsive to calling back problem-plagued vehicles, for repair. NHTSA’s long, track-record shows that it takes its job, car safety, seriously.

Marc Stern has been an auto writer since 1971. It was a position that fulfilled two boyhood dreams: One was that I would write, and two that I write about cars. When I took over as my newspaper’s auto editor, I began a 32-year career as an automotive columnist. There isn’t much on four wheels that I haven’t driven or reviewed. My work has appeared in Popular Mechanics, Mechanix Illustrated, AutoWeek, SuperStock, Trailer Life, Old Cars Weekly, Special Interest Autos, and others. Today, I am the Ford F150 reporter for Torque News. I write how-to and help columns for online sites such as Fixya.com and others. You can follow me on Twitter or Facebook.