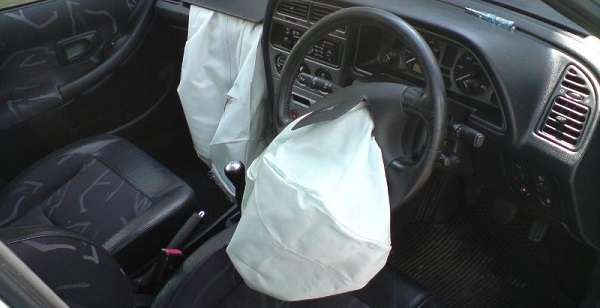 For more than 18 months, whenever an airbag problem has been reported, the assumption has been that the device was made by Takata. That is no longer the case as 8 million ARC-made airbag inflators face a probe by Canadian and U.S. safety investigators.
Advertisement

A second, more subtle assumption has been that the vehicles involved in the first, record-shattering airbag recall were Hondas. However, there are other vehicles involved. As has been shown, on least one other occasion, a Ford truck has been involved and now Hyundai has joined the circle. A 2009 Hyundai Elantra crashed in Newfoundland last month, causing the airbag deployment.

The Hyundai Elantra’s driver was killed by the deployment. As in other incidents, the airbag inflator shattered and shrapnel from the housing scythed through the interior killing the driver. The inflator, assembled in China for the Knoxville, Tenn.-based ARC, introduced a new design into the exploding airbag mix, a hybrid. And, though it uses ammonium nitrate, the cause of the record-shattering Takata airbag, the amount in the ARC device was tiny, compared to the Takata inflator. Thus, probers are seeking the cause.

While Transport Canada investigators are centering their probe on Hyundai, at the moment, safety authorities from the U.S. have broadened a probe launched in 2015 to include 8 million inflators used not only by Hyundai but also by Kia, its subsidiary, General Motors and Fiat Chrysler Autos.

Takata probe hits 100 million vehicles
The new probe comes as the Takata airbag probe has reached about 100 million vehicles worldwide. So far, at least 14 deaths have been linked to its exploding airbag inflators. More than 100 injuries, some severe, have also been associated with the defective airbag inflators. The latest deaths in the Takata probe occurred in July in Malaysia.

Ammonium nitrate is known to deteriorate on exposure to moisture. As it deteriorates, it becomes more powerful. Poorly sealed airbag inflators allow moisture to penetrate the propellant package over time and, as a result, the device has become a time bomb in the millions of vehicles in which they are used. High temperature is also a cause, so investigators have focused on high-humidity areas such as the Southern states in the U.S., Puerto Rico, the U.S.Virgin Islands, California, Gulf Coast, Hawaii and U.S. Trust Zones in the Pacific (Guam, Saipan and the Marshall Islands). Some have estimated that when the recall concludes in 2019 or so that as many as 250 million vehicles will have been affected.

Takata has been rocked by the recall. For the longest time, though, the manufacturer refused to acknowledge the problem and stonewalled investigators. There have been reports, as well, that Takata was not altogether truthful with Honda – one reason the automaker has turned its back on the airbag manufacturer – even though the automaker used the airbag-maker as its sole source. And, Honda had a small ownership stake. NHTSA efforts forced Takata to admit is products were faulty and to agree to a recall timetable that stretches over the next two years.

Drivers told to stop driving
There is one group of vehicles, 313,000 Hondas manufactured from 2001-2003, whose inflators are so dangerous that the agency has told drivers to stop driving them until they can be taken to dealers and repaired. Indeed, NHTSA has prepared a public service announcement, featuring the driver of one of those vehicles, that urges drivers to have the fix done as soon as possible. The announcement centers around 2001-03 Civics, vehicles that are included in the stop-driving group.

In the ARC probe, investigators have indicated that the design of the airbag inflator is radically different than the type used by Takata. ARC inflators employ different deployment mechanism. Rather than relying solely on an explosive charge to inflate the airbags, ARC uses a high-pressure design that uses stored gas. It only uses a little ammonium nitrate to initiate the deployment.

As noted, the safety devices were assembled in China. NHTSA noted in its filings that it believed that no Chinese-made inflators were used in 2009 Elantras sold in the U.S.
The ARC airbag probe began a year ago when NHTSA opened an investigation following reports of two injuries related to the devices. One of the injuries occurred in a 2002 Chrysler Town & Country minivan, while the second happened in a 2004 Kia Optima. When the probe opened, it impacted 490,000 vehicles.

ARC has not commented, while GM, Fiat Chrysler and Hyundai have all indicated they are cooperating with the probe. Hyundai is Kia’s parent.

Parks McCants wrote on August 5, 2016 - 2:17pm Permalink
Actually, Honda Motors utilizes no less than 4 airbag manufacturers in the assembly of Honda, Acura variants. Great article, thanks for sharing.
Marc Stern wrote on August 9, 2016 - 11:07pm Permalink
Thanks. Didn't they add three new manufacturers early this year when they turned off the soul-sourcing? I believe they were Daicel, Autoliv, and ZF/TRW.
Judy alsop wrote on July 25, 2017 - 5:33am Permalink
I have 2013hyundai wagon 30what air bags do I have in it thanks Judy