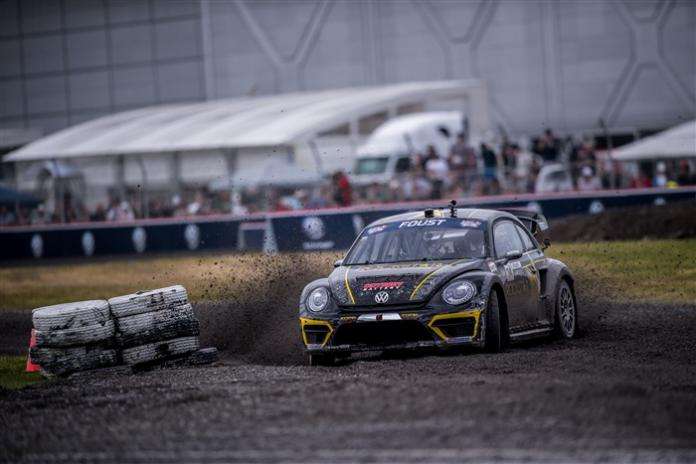 Facing adversity Saturday that knocked one of its two entries out of the competition at the Ottawa Air and Space Museum, the VW Andretti Red Bull World Rallycross team still managed three podium finishes during a weekend of racing. On Sunday, the second day of a doubleheader, Tanner Foust and Scott Speed, the team's drivers had a 1-2 finish. Foust had a podium finish Saturday.
Advertisement

After a disappointing day Saturday in which the Volkswagen Andretti Rallycross team faced fierce competition from its rivals, drivers Tanner Foust and Scott Speed recovered Sunday to take a 1-2 finish in Race 2 during a weekend double-header Red Bull Global Rallycross event in Ottawa, Canada. Subaru scores win on Ottawa Day 1

Difficult track conditions took their toll on the championship points-leading team. Though the pair managed to lead through each day’s qualifying events, things conspired on Saturday to knock Speed out of the Semifinal and Final races of the day. Speed also lost his first place standing in the driver’s championship. It was a long afternoon and evening for the VW Andretti mechanical team as they worked valiantly to get Speed’s car back in racing shape. The mechanics had the No. 34 Rockstar Energy Drink entry ready for Sunday’s activities.

Sunday’s Final proved more of a challenge for Speed, while Foust, driver of the No. 34 Rockstar Energy Drink Beetle GRC had clearer sailing for his part. A red flag and a restart, due to a first lap incident, shook up the field. On the restart, Foust grabbed the lead and never relinquished it.

Meantime, Speed found that the advantage he received in his start was nullified on the restart as he was pushed further back into the pack on the starting grid, spending most of the race stuck behind a slower car. As was the case in Connecticut, where he had to make what amounted to a hole shot on the last lap to obtain his third place in Final 2, Speed had to repeat it. Speed and No. 41 took advantage of a competitor’s mistake, passing on the last lap to earn a second-place finish.

“This has been a tough weekend for everyone on the team, but we didn’t give up, and it paid off in the end,” Foust told reporters at the end of the race. “The Beetle GRC had a lot to contend with, but it handled this rough track beautifully and took us to two more important podiums.”

“This wasn’t an easy weekend for my side of the garage, but we made a good recovery on Sunday to get back up on the podium,” said Speed. “It seems like we’ve been the king of last-lap passes this season, which is a super exciting way to race, but I’m hoping for a normal event where we can lead from the front next time out. We lost a big bunch of points from the lead we had coming into Ottawa, but I know we’ll get back on it and keep our comeback going strong.”

Sunday’s victory allowed Foust to leapfrog his teammate, who encountered the troubles on Saturday and kept him from the Semi and Final races, into the championship points lead. VW also is a leader in the manufacturer’s point standing as well.

With the second half of the season on tap, the Volkswagen Andretti Rallycross combine has claimed four victories in six races, while also scoring an additional five podium finishes during the same time. Foust, talking about his team’s results so far and its position at the half-way point in the season, said:

“This is a great spot for us to be at the season’s halfway mark,” said the driver of the No. 34 Beetle GRC. “There are still plenty of races to go, but we’ve got the cars, crew, and drivers to get it done, so I’m looking forward to a strong second-half of the season.”

Volkswagen Andretti Rallycross will return to action for Red Bull Global Rallycross’s inaugural visit to Indianapolis on July 9. Broadcast of the race will air LIVE on NBCSN at 8:00 p.m. (EST).

For Some Former Daimler Managers Daimler Is Authority, While Tesla Is Like a Startup
How Daimler Unintentionally Subsidizes Tesla Giga Berlin
END_OF_DOCUMENT_TOKEN_TO_BE_REPLACED