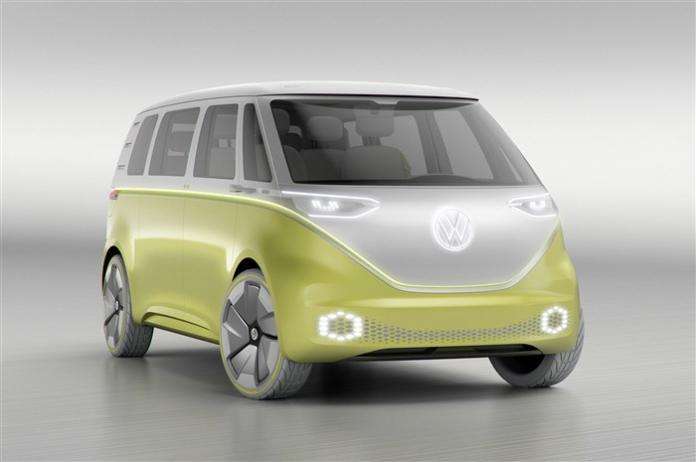 Volkswagen's I.D. electric series, built using the same MEB platform, continues to draw raves. For the second time in the last two years, the I.D. Buzz, an MPV, that stands on a platform that is about mid-sizes was named "Concept Truck of the Year."
Advertisement

Volkswagen’s I.D. Buzz MPV continues to draw raves and awards. Introduced last year, the I.D. Buzz is an all-electric whose design team looked back to the future by using the lines of the classic VW Microbus and a platform and powerteam that are up to the minute.

And so, for the second time in two years, the I.D. Buzz electric has been honored with a “Concept Truck of the Year Award. The award ceremony was held during the weekend at the 16th Annual North American Concept Vehicle of the Year Awards at the Concours d’Elegance of America in Plymouth, Mich.

“We are proud that the idea Buzz was chosen as the 2017 Concept Truck of the Year and that Volkswagen has been given this honor for the fourth time,” Abdallah Shanti, executive vice president and group chief information officer for Region Americas, Volkswagen of America, said in accepting the award. “Volkswagen will lead the world in the shift to electric mobility, and the I.D Buzz demonstrates the kind of innovative design and engineering that’s a trademark of VWs past and future.”

The second model in the three I.D. concept vehicles shown so far; the MPV uses the Modular Electric Drive Matrix (MEB) platform. The Buzz highlights how well-suited larger vehicles are to electric power. The Buzz maximizes space utilization on a footprint that is similar to that of a mid-sized passenger car. The I.D.Buzz features an all-wheel-drive powertrain. The Buzz’s batteries and drive should enable the MPV to achieve a driving range of up to 270 miles.

The electric MPV’s batteries are located under the floor so that the passenger/cargo compartment features a flat floor with no intrusions. The MPV offers up to 162.5 cubic feet of cargo space with the rear seats folded.

Back To The Future

Though the Buzz takes many cues from the past, its technology points to the future. For example, the Buzz features a retractable steering wheel that senses the driver’s intentions, as well as exterior lighting that can provide communication with pedestrians when using the I.D. Pilot autonomous driving software. The ambient lighting provides a unique visual signature that makes the Buzz unmistakable.

More than two dozen jurors participated in the selection process of the North American Concept Vehicle of the Year Awards. Twenty vehicles, each introduced to North America during this seasons auto shows, were part of the judging process. The shows included: