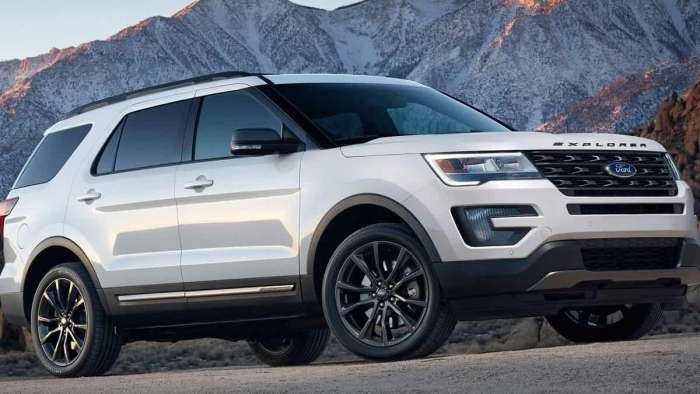 2022 Ford Explorer Is Evolutionary, Not Revolutionary

After looking closely at the 2022 Ford Explorer, Torque News has found that changes to the top-selling SUV are more evolutionary than revolutionary.
Advertisement

For the longest time, Ford has been a pioneer. Suppose you go back far enough in its history. In that case, you will find that it was perhaps the original automaker to offer a snowmobile-style vehicle. The Model T in the 1915 era could be purchased with a changeable rear axle that could be swapped to drive a tank-style tread on the rear. The front axle had to be swapped out so that it could mount a pair of mahogany skis. It was quite handsome in its way).

Indeed, Ford also made it known widely that the same vehicle could be turned into a tractor. This was to meet Henry Ford's vision that people could become farmers, which he held to be an excellent vocation.

Fast-forward to the years of World War II and Ford, along with Chrysler, offered a series of all-wheel-drive trucks that the factory churned out in the thousands. It also offered a small, Jeep-like vehicle that familiarized many veterans for the war with all-wheel-drive. (It wasn't anything like today's all-wheel-drive that only requires the spin of a wheel to choose all-wheel-drive. No, the WWII vehicles were quite rough and used mechanically locking hubs that most operators left engaged).

We came to the 1960s, where Ford pioneered the personal SUV, also known as the original Bronco. Through the mid-1990s, the Bronco set the pace for personal SUVs. About 1996, the market overtook the Bronco, which was quite good at the time, and the automaker withdrew it. The Bronco brand is now back on the table.

Overhauled extensively for 2021, the Explorer offers the same three-row design while it also offers connectivity and many updated safety features. The Explorer is available in six trim levels. They are:

The base and XLT use the standard small turbocharged four as the powerplant. They are 4X2 models (four-wheels with rear-wheel-drive). You can add all-wheel-drive as an option.

Moving into the pricier models, the Limited comes in both standard and hybrid versions, while the Platinum and ST offer twin-turbo V-6 engines.
Those looking at the competition should include the SUVs like Kia's Telluride, Hyundai's Palisade, and Mazda's CX-9, and don't forget models offered by GMC and Chevy.

Ford Adds To List for 2022
Among the changes Ford made during last year's huge makeover and carried over to 2022 Explorer:

Looking closely at the exterior of the Explorer, we find the look is evolutionary. The front end sports a new grille, lighter housing, and shorter front overhangs. There is also higher ground clearance and better approach angles for off-road work.

The side view gives more definition of the changes. It features a tapering roofline with a sculpted surface, though the overall rework is said to look as if it has been on the road for years.

Moving to the inside, you'll find multi-contour seats that work with a tiered dash design that gives you more space. You'll also notice that an added 6.3 inches of wheelbase give you better first and second-row hip space.

Overall, observers have said that the new version of the Explorer is just an evolution of the previous model.
Cargo capacity is up. For the first time, Explorer can fit a 4 X 8 sheet of plywood. Total capacity is 87.8 cubic feet available behind the front seats. And speaking of the seats, you will find the seats offer heating, cooling, and massage. The features are available in all three rows. And, for those who need to see the sky, there's a more extensive panoramic roof.

Base Powerplant Rated At 300 Horsepower

As to specifications, the base model weighs in at 4,345 pounds. The standard powerplant is the 2.3-liter turbocharged four rated at 300 horsepower with 310-pounds of torque available. This also means that Ford has dropped the 3.5-liter V-6. It is mated to Ford's 10-speed tranny. For those looking for a bit more, you should check out the Platinum model with its 365-horsepower 3.0-liter twin-turbo V6 and 380-pounds-feet of torque. Other engines are still subject to change. And, don't forget the Explorer ST with its 400-horsepower twin-turbo (3.0-liter V-6 version of the Platinum engine). There's also the Limited Hybrid with its 3.3-liter V-6 and a 318-horsepower total output.

The 2022 Explorer is expected to go on sale during the upcoming summer. 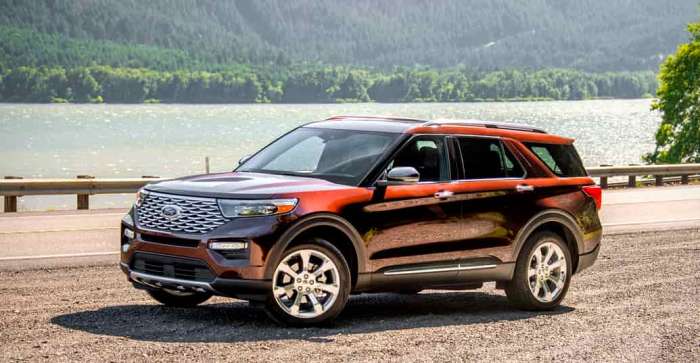