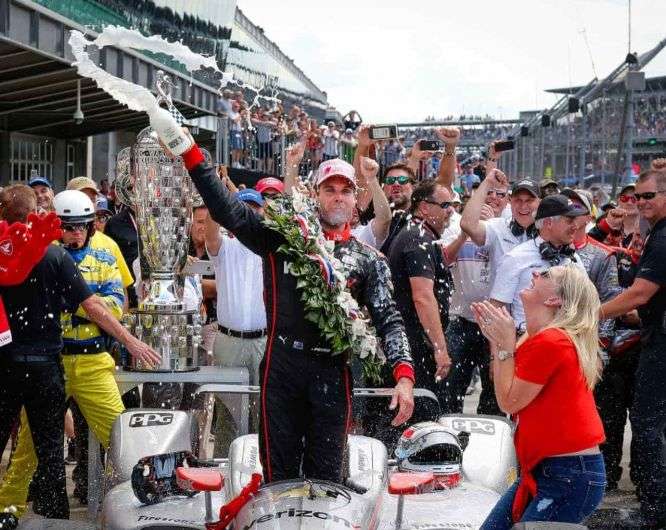 Will Power Wins Indy 500 Driving for Chevrolet and Penske Racing

Team Penske veteran driver Will Power just won the biggest race of his career at the Indianapolis 500.
Advertisement

Will Power celebrates, while his wife Liz cheers him on, after winning the Indianapolis 500, for the first time. It was Power’s 11th attempt to win ‘The Greatest Spectacle in Racing’. It was team owner Roger Penske’s 17th win and the 10th win for Team Chevy.

In victory lane, Power said, “I can’t describe it. I feel like collapsing. I want to cry. I was wondering if I would ever win it and thoughts went through my mind during the month. This was the last box to tick, but I’m not done.”

The weather for the 102nd Indy 500 was a stifling 91 degrees, the second hottest in history.

“He won the race today because he was the best. It’s a great day for Team Penske and a great day for Chevrolet,” Roger Penske said. This is Power’s tenth year driving for Penske on the Indy circuit. Power and his wife, Liz, live in Charlotte, North Carolina with their young son Beau.

“Will Power showed speed all month and today he delivered a huge win for his team, Roger Penske and Chevrolet,” said Jim Campbell, U.S. vice president of Performance Vehicles and Motorsports. “Will and his crew never gave up all race. They kept making the right adjustments on the car at the right time, and Will simply drove a great race.”
Campbell added, “Will’s win is extra special because it is Chevrolet’s 10th win at this iconic race, and Roger’s 17th Indy 500 championship. We couldn’t be prouder of the one team effort with Chevrolet Propulsion, motorsports, Ilmor, Pratt & Miller and Team Penske. The Chevrolet Indy V-6 delivered the right combination of power, durability and efficiency all race long.”

Campbell is also pleased with Carpenter’s second place finish in a Chevy. “Ed Carpenter was also fast during the month of May, clinching the pole, leading many laps today and finishing runner-up, capping a 1-2 finish for Chevrolet. The Speedway was packed today, the atmosphere was electric and it was a thrilling race to the end.”

Carpenter was the hometown favorite. He won the pole and you could hear the crowd cheering for him. Following the race Carpenter said, “I’m extremely proud of the entire Ed Carpenter Racing team. It’s been a few years since I had a top-10 finish, so this feels good.”

While this is Power’s first win at the Indy 500, he already won on the 2.4 mile Indy road course. He is the first driver to win on both courses. He is also the first Australian to win the Indy 500.

The 2018 Indy 500 was Danica Patrick’s last race. She competed in the Daytona 500 in February and said this race would be her last. Her day ended in disappointment when she crashed about a third of the way through the race.

Helio Castroneves’ attempt for a record-tying fourth Indianapolis 500 victory ended on Lap 147 in a single-car accident and Tony Kanaan crashed with just ten laps to go in the race.

Races like Indianapolis 500 are important not just for publicity for the companies that are involved, but also for research. Many of the strategies used in racing like light-weighting will eventually be used in regular vehicle production, if the solutions are practical. The race cars help the auto companies study fuel conservation and engine performance. The Team Chevy vehicles are powered by 2.2-liter twin-turbocharged, direct injected V-6 engines.