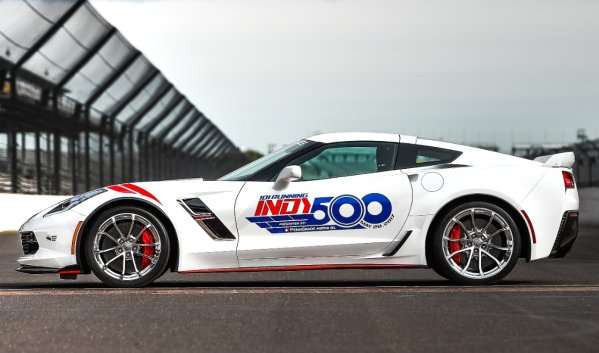 The 2017 Chevrolet Corvette Grand Sport will serve as the official pace car for the 2017 Indianapolis 500, marking the 14th time that a Corvette has led the Indy field with 2017 being the 101st running of the legendary race.
Advertisement

Early last month, we brought you the news of the 2017 Chevrolet Camaro SS Convertible serving as the Festival Car for the 2017 Indianapolis 500, but it will be a new Chevrolet Corvette which leads the Indy 500 field to the green flag when the race takes place on May 28th. To be exact, the track-ready Corvette Grand Sport, which incorporates handling bits of the Z06 with the drivetrain of the Stingray for an “affordable” road-handling monster.

“Chevrolet is proud to once again pace the Indianapolis 500,” said Steve Majoros, marketing director for Cars and Crossovers. “The Corvette Grand Sport’s performance capability and motorsports heritage make it the perfect choice to pace the Greatest Spectacle in Racing.”

In addition to being the 14th time for the Corvette, the 2017 Indy 500 with mark the 28th time where a Chevrolet product has led the field. The first Chevy Indy Pace Car came back in 1948, when the Fleetmaster Six was chosen. Since then, other Chevrolet pace cars have included the Bel Air, the Camaro (9 times), the Beretta Convertible, the Monte Carlo, the SSR and, of course, the Corvette.

“Chevrolet and Indianapolis are inextricably linked, sharing one of the longest racing heritages in all of motorsports,” said J. Douglas Boles, president of Indianapolis Motor Speedway. “We are proud of the longstanding relationship between Chevrolet and the Speedway and we love having the Corvette Grand Sport lead the 500 field to the green flag.”

At this rate, it appears as though Chevrolet will be leading the Indy 500 field well into the foreseeable future.

LG's New EV Battery Plant Is a Welcome News for Tesla
Tesla Giga Berlin's New Hurdle: It's Not Only the Gov't, but Now Tesla Itself
END_OF_DOCUMENT_TOKEN_TO_BE_REPLACED