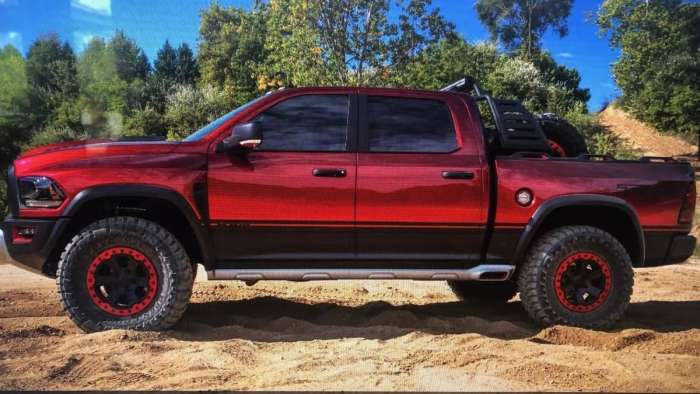 The suspense will be over in less than a week. Ram announced it will finally unveil the Hellcat-powered beast on August 17th.
Advertisement

Ram still isn’t tipping its hand when it comes to the final numbers on the 2021 Ram 1500 Rebel TRX. The announcement came today that the company will finally unveil the truck that it is calling “the off-road king”. Here is the official notice.

One of this year’s most hotly anticipated automotive unveilings, the debut of the TRX, Ram’s new performance-focused off-road pickup, will be streamed online and available for public viewing.

Ram has been teasing the unveiling all summer, with tweets and social media, promising that we would see the truck in late summer and it would begin production in the 4th quarter.

The Ram ‘build and price’ page, greets you with a great photo of the Ram 1500 Rebel TRX concept truck. Ram also has a short video of the 2021 Ram 1500 Rebel TRX Concept with its engine roaring promising a 6.2L supercharged Hemi engine and 575 horsepower. The video invites you to Brave Its Roar.

Truck lovers have been praying for the Hellcat's supercharged 6.2-liter V8. The video suggests that the TRX will get the engine, fans are hoping the truck will get all 707 horsepower that the Hellcat engine can carry.

Ram lovers have been salivating over the idea of a 700+ horsepower Ram truck that could rival the Ford F-150 Raptor and build on the off-roading skill of the Ram Rebel. It was expected that the beast would be unveiled at the New York Auto Show, where the concept was first displayed in 2016. However, the COVID-19 crisis hit and forced all of the automakers to wait on their new product unveilings. The Ram TRX could have made a big impression at the new summertime Detroit Auto Show but that too was canceled because of COVID-19. Ford unveiled its all-important redesigned 2021 F-150 online last month and Ram took to Twitter to reaffirm plans for its super-truck.

All of the truck companies have been trying to crack the off-road market. GMC and Chevrolet both now have special off-road versions of their popular trucks as they try to cut into the F-150 Raptor’s image. Off-roading has skyrocketed in popularity in recent years and the COVID crisis seems to have accentuated it, as more and more people are opting to drive to their vacations rather than fly. Camping, too, has grown in popularity during the crisis, which also adds to the demand for a vehicle that can handle both the road and off-roading.

Tesla-Funded Research Reveals One of The Biggest Mysteries of EV Battery
Tesla Tesla Buyer Nets a Whopping $12,000 Discount After Asking for Reduction
END_OF_DOCUMENT_TOKEN_TO_BE_REPLACED