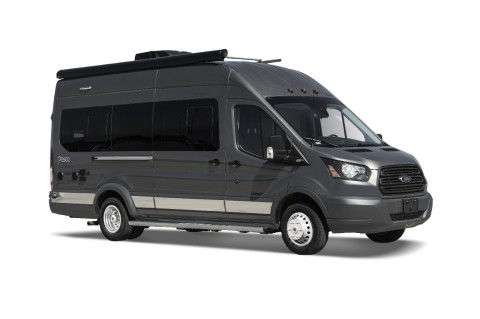 Ford is teaming up with Winnebago and using its 2017 Ford Transit to breathe new life into the motorhome market.
Advertisement

After dwindling for several years, interest is growing again in motorhomes and smaller recreational vehicles. Ford and Winnebago say that the van-based motorhome segment grew by double digits last year and sales are already up by 36 percent in the first few months of 2017. They are projecting that vans will become the fastest growing segment of the motorhome industry in 2017. Ford intends to capitalize on that growing segment by providing two 2017 Ford Transit platforms to Winnebago.

The Ford Transit van was introduced to the American market in 2015 as the replacement for the Econoline van segment. The motorhome market was quick to see the adaptability that is built into the Ford vehicles. The Paseo is a high-roof, extended-length Class B motorhome featuring a full bath, kitchen with refrigerator, and sleeping for two adults. Winnebago is one of the companies that appreciates the versatility of the Transit platforms. The 2017 Ford Transit is available in gas, diesel and CNG/propane versions. It is also available in three different roof heights, three overall lengths and two wheelbases.

The Winnebago Fuse is a much larger RV, built for carrying more people and having much more space. According to information released by Ford and Winnebago, “The Fuse uses a dual-rear-wheel Transit van cutaway chassis for a full-feature, 24-foot Class C motorhome with kitchen, bath and a slideout – for comfortable sleeping for four adults.” Industry leaders aren’t sure how much of the surge is fueled by lower gas prices. “Our customers have responded incredibly well to the new Transit platform,” said Russ Garfin, Winnebago product manager. “They love the driveability and the smooth ride, and the feedback on both of the engines we use – the EcoBoost® gas and five-cylinder diesel – has been great.”

Because the Winnebago RV is based on a known Ford Transit platform, it reassures many owners that they are always relatively close to a repair shop if any problems develop.

One of the Fuse owners says, “We looked at a lot of competitors, but once we saw how open the Fuse felt inside and how it still drives like a go-anywhere car, we were hooked,” said Don Pace. “We like that it’s built on a Ford platform – not just because it has great performance, but because there are more Ford dealers around the country, so there’s that peace of mind. We just love our Fuse.”