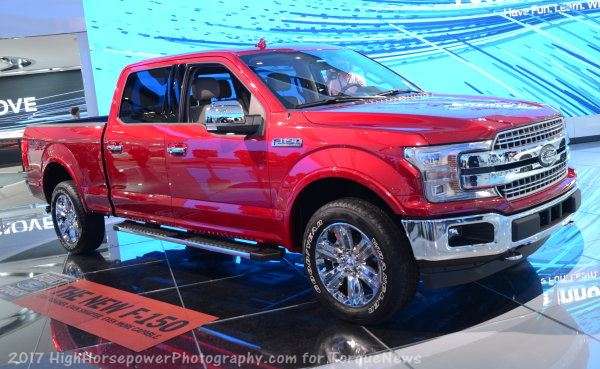 We learned back in January that Ford will have a hybrid version of their popular F150 pickup on sale by 2020 and with the discussion of electrified pickups flaring up lately, today we take a look at the possibilities for the most fuel-friendly Ford F-Series.
Advertisement

Since Ford announced around the 2017 North American International Auto Show in Detroit that they would be bringing hybrid versions of the Mustang and F150 to market by 2020, the company hasn’t had much to say about either of these popular models being offered with an electrified version. However, Business Insider spoke with Ford Chief Technology Officer Raj Nair, the latest bit of information on the electrified F150 hit the internet.

Nair told Business Insider that while a plug-in electric Ford truck isn’t out of the question in the future, but for the short term, we can expect to see a hybrid F150 with an internal combustion engine mated with an electric-assisted hybrid drive system.

But when the Ford F150 Hybrid arrives in the next few years, what exactly can we expect? We don’t know for sure, but based on the few clues along the way, we can make some guesses. Today, we look at the basic possibilities for the first hybrid Ford pickup.

So far, the only information on the hybrid F150 promised to arrive by 2020 is that it will offer “powerful towing and payload capacity”. That is pretty vague, but we also know that the Ford Mustang is slated to get a hybrid drivetrain by 2020 and it is more than possible than these two vehicles will share a hybrid drivetrain. After all, the F150 and Mustang have shared many engines over the years and according to Ford, the hybrid Mustang will pack “V8 power and even more low-end torque”, so it seems reasonable to believe that the Mustang hybrid with V8 power and torque could serve as a great hybrid drivetrain for the F150 as well.

Right now, the only engines in the Ford Mustang lineup are the 2.3L EcoBoost 4-cylinder, the 5.0L V8 and the 5.2L flat plane V8. Ford is not going to make a hybrid of the Shelby engine, so it seems likely that the hybrid drivetrain will be mated with some variation of the current 2.3L or 5.0L engines. Right now, the 5.0L V8 offers 435hp and 400lb-ft of torque while the 2.3L EcoBoost offers 310hp and 320tq.

Say that Ford built a hybrid drive system which worked in conjunction with the new 10-speed automatic transmission. If this hybrid drive system offered 125hp and 100lb-ft of torque, pairing it with the 2.3L EcoBoost could result in total system output of 435hp and 420lb-ft of torque – V8 power and more than V8 torque. The other option that the hybrid system will be mated to a lightly detuned V8, so the electric assist portion would lift the output back up to the output of the current V8 while offering more torque, but it seems that the EcoBoost route would be the more fuel-friendly option.

In either of those cases, a hybrid drivetrain with at least 435hp and 404lb-ft of torque would make for one powerful F150. Really, regardless of whether Ford picks the 2.3L EcoBoost, the 5.0L V8 or some new engine for the Hybrid Mustang and F150, we can expect that the two power plants will be tuned for the different duties. The F150 will be tuned to tow, haul and get great mileage while the Mustang will be towed to offer the proper performance car feel with what will likely be segment-leading fuel economy numbers.

The other option is that Ford could reintroduce a V6 into the Mustang in the form of a hybridized 2.7L EcoBoost. That engine has made the F150 the most efficient gas-powered half ton truck in America, but when coupled with an electric assist motor and the new 10-speed automatic, that smaller EcoBoost V6 could offer V8 power and even more torque. This engine seems to make the most sense in the F150 hybrid, but Ford would need to make this engine fit in the Mustang – or the two vehicles could rely on entirely different hybrid drivetrains with different sized engines.

In any case, I expect that the hybrid system for both of these vehicles will utilize the new Ford 10-speed automatic. Unfortunately, with these vehicles promised by 2020, it could be years before we get more information.