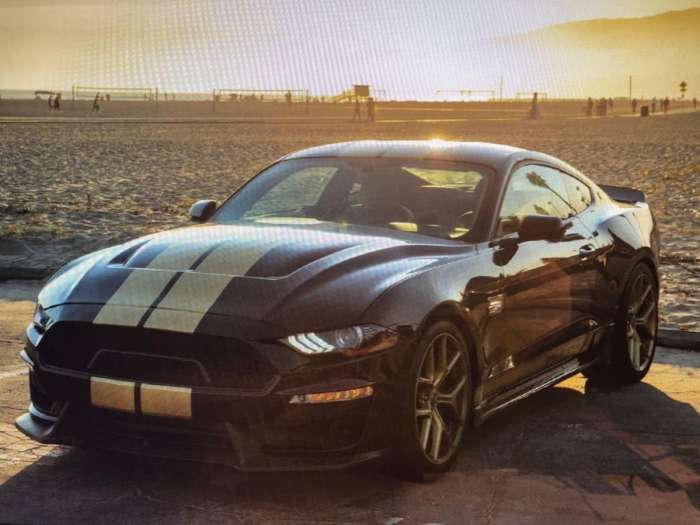 Shelby American is back with a new version of the popular Ford Mustang Shelby GT. The iconic car company is promising more horsepower and more performance for America's favorite sports car.
Advertisement

It seems that the Ford Mustang gets more popular every year and the high performance versions are in high demand. The 2019 Shelby GT will be back with a V-8 kicking out 480 horsepower or there is also a Ford Performance Supercharger available that will boost the Shelby GT’s horsepower to over 700.

The Shelby GT shows off Shelby’s modified hood, hood vents, stripes and other body modifications, like rocker panels and a spoiler. It also rolls on special Shelby wheels. Shelby vehicles also sport Carroll Shelby signature plates. Shelby American cooperated with Ford Performance on tweaking the suspension and maximizing the ride and handling without sacrificing any of the Mustang fun.

It can be ordered in any color that is available from Ford. Shelby will add special touches throughout the interior, like special embroidery on the seats and floor mats. One of the coolest things about owning a Shelby is that every Shelby GT will receive a special serial number and be listed in the official Shelby Registry.

The Ford Mustang Shelby GT can be ordered through select Ford showrooms. Drivers can choose either a 6-speed manual or a 10-speed automatic transmission.

The Shelby GT will also be available with a special GT-H package and this time it doesn’t stand for Hertz, like in the old days when people raced the Hertz editions. This time the GT-H stands for Heritage or premium edition. The GT-H versions come in classic black and gold or white and gold paint schemes with upgrades like Ford Performance shocks and struts and even gold painted wheels.