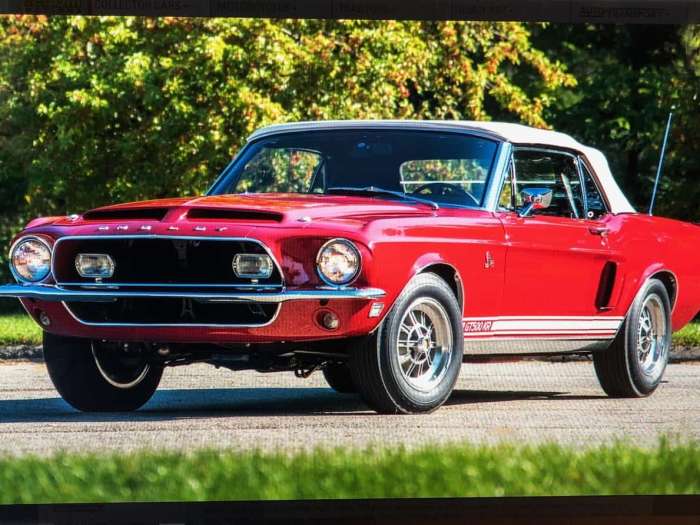 Only 518 of the Shelby GT500KR convertibles were originally produced, and one of the most rare combinations is roaring to the auction block later this month in Chicago.
Advertisement

Factory Correct in Every Way

It is the factory correct color of CandyApple Red exterior, with a black exterior and comes complete with the white convertible top. More importantly, it has the 428 Cobra Jet big-block engine that gives it the Shelby roar.

The “King of the Road” title is symbolized by the KR on the side-stripe. The name was coined and copyrighted by Carroll Shelby himself.

The vehicle is documented on the Shelby Registry.

It may sport California plates now but it was originally sold new at the Jack Gibbons City Ford dealership in Watchung, New Jersey.

Aside from the special stripe and KR lettering on the side, you can recognize the 1968 Shelbys in a couple of ways.
The 1968 Shelbys look different from the 1968 Ford Mustangs because of the wide scoop on the front of the hood. The rear end has a ducktail spoiler and uses the 1965 Thunderbird sequential tail lights. The Shelbys have power steering and power front disc brakes along with a roll bar and shoulder harnesses.

The 1968 Shelby Mustang GT500KRs were the top of the line for their time. They received the premium Mustang interiors and added padded Cobra-embossed armrests and dual gauges.

Mecum describes this beauty this way:

"As listed in the Shelby Registry and its Deluxe Marti Report, this GT500KR was sold new at Jack Gibbons City Ford in Watchung, New Jersey, and came from the factory with the 4-speed manual transmission, 3.50:1 Traction-Lok rear axle, tilt-away steering column and AM radio. The recipient of a multi-year restoration to concours standards using many NOS and original parts, this GT500KR is highly correct down to the smallest detail from its original assembly-line-only "Made in England" Lucas driving lamps to its original Shelby VIN tag, body buck tag, door tag and dash VIN tag. During the restoration the engine was balanced and blueprinted to perform better than new. The original AM radio was upgraded to a very rare factory AM/FM unit, and the car is fitted with Shelby 10-spoke wheels and correct E70-15 Goodyear Polyglas blackwall tires that were unique to the 1968 GT500KR. This rare Candyapple Red 4-speed GT500KR convertible is truly incredible top to bottom and would be a wonderful addition to the finest Shelby collections in the world, or a great start of one."

The rare 1968 Shelby Mustang GT500KR is scheduled to be sold at the Chicago Mecum Auction, technically in Schaumburg, Illinois, October 25-27, 2018.
You can see the full Mecum listing here.