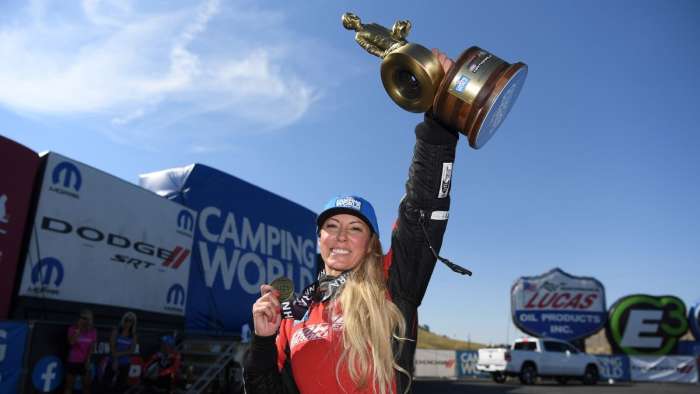 Leah Pruett won her first big race of the year, and she did it at the race named for her biggest sponsor. Pruett drove her Dodge Power Brokers dragster into the winner’s circle at the Dodge Power Brokers National Hot Rod Association (NHRA) Mile-High Nationals. Her win gives Tony Stewart Racing its first Top Fuel Wally Trophy. Dodge is known for its high-horsepower muscle cars like the 2022 807-horsepower Dodge Challenger SRT Super Stock and the 797-horsepower Dodge Charger SRT Redeye. The Charger is the most powerful and fastest mass-produced sedan in the world.

This is Leah Pruett’s second big win at the Bandimere Speedway in Morrison, Colorado. It is her first big win driving for Tony Stewart Racing. Pruett married Stewart last November. This is Pruett’s tenth win of her Top Fuel career. She has over 500 other wins in different divisions. Pruett is now sixth in the Top Fuel championship standings.
Bandimere is a tricky track. Because the teams are racing in the mountains, it is difficult to get the fuel and oxygen mixture exactly right. Plus, the Denver area was experiencing a brutal heatwave further complicating the race conditions. Despite the heat, Pruett qualified at 322.50 mph.

“Congratulations to Leah Pruett on powering her Dodge Power Brokers Top Fuel dragster to her 10th career win and Tony Stewart Racing’s first Top Fuel victory at our headline event,” said Tim Kuniskis, Dodge Brand Chief Executive Officer - Stellantis. “Leah’s victory today demonstrates the hard work, dedication, and tenacity that she and her team put into every race, the kind of performance that Dodge//SRT is known for, and what enthusiasts can expect from Dodge Power Brokers and Direct Connection.”

“This is everything,” said Pruett of the Wally trophy she held in her arms. “This being the Dodge Power Brokers (Mile-High) Nationals we brokered that Dodge power all week long. My crew has been flawless all weekend long and couldn’t be more proud to do this in front of these Denver Fans. I’ll say two things; this view never gets old. Also, this is the first Top Fuel win for Tony Stewart Racing and that will also never get old.”

Pruett’s Tony Stewart Racing teammate, Matt Hagan, did not do as well during the Dodge Power Brokers Mile-High Nationals. Hagan and his Dodge Charger SRT Hellcat Funny Car exited early in the competition. Hagan is still second in the Funny Car championship standings.

The next stops on the NHRA’s three consecutive event western swing are at Sonoma Raceway in California for the Sonoma Nationals July 22-24 and then Pacific Raceways for the Northwest Nationals near Seattle, Washington, July 29-31.

Fans can follow the NHRA action this season at DodgeGarage, the one-stop shop for Dodge//SRT and Mopar drag-racing news. The site includes daily updates and access to an online racing news, events, galleries, available downloads and merchandise. You can also follow all Dodge Motorsports at @DodgeMoparMotorsports on Instagram.

Tesla Contemplates A New Strategy for China Retail even As Sales Boom
Jay Leno on Elon Musk & EVs: “I Think He Should Get ... Credit"
END_OF_DOCUMENT_TOKEN_TO_BE_REPLACED