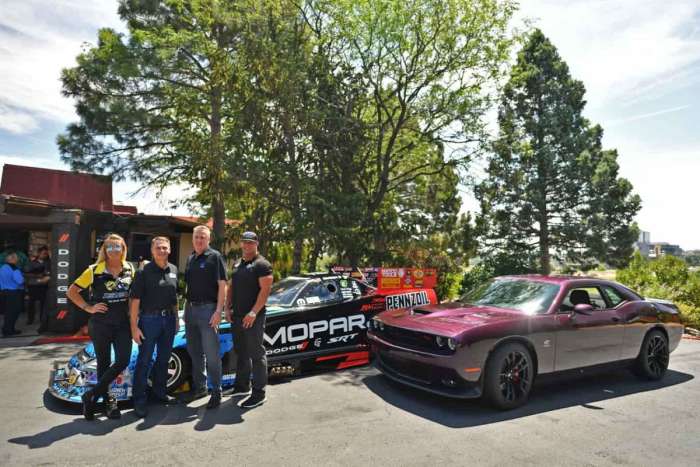 NHRA Drag Racer Leah Pritchett blew the doors off the competition at the Dodge Mile-High NHRA Nationals Powered by Mopar. It was a big weekend for Pritchett who helped introduce the 2019 Dodge Challenger R/T Scat Pack 1320.
Advertisement

It was a huge weekend for 30-year-old Leah Pritchett as she rocketed her way to victory at the Dodge Mile-High NHRA Nationals Powered by Mopar. On Thursday, she was selected to introduce the 2019 Dodge Challenger R/T Scat Pack 1320, doing a burn out to illustrate the power of the new Dodge. She demonstrated the Mopar Dodge power all weekend long, not only winning but setting a track record of 327.19 mph during her top fuel dragster qualifying.

This was Pritchett’s first win at Bandimere Speedway near Denver, the 11th win of her career and puts her third in the overall standings.

Big Victory for Dodge and Pritchett

Dodge has sponsored the NHRA races at Bandimere outside Denver for 30 years, but this was the first year as the title sponsor. Pritchett admits that it is pretty special to win your sponsor’s race. “I think there is something different about pressure. You can look at it as, you have to do well at your sponsor’s race, or you have a partner who believes in you, and all the people there bring that vibe and that energy. Like I said, we have our own zip code on the Mopar midway, and pitting with (Matt) Hagan and his new (Mopar Dodge Charger SRT Hellcat) body. You can look at it two ways, as pressure or positive momentum, and that’s what happened this entire weekend.”

Pritchett credits the whole team for her Mopar Dodge 1320 Top fuel Dragster win. “This is all because I have a phenomenal team and an incredible racecar. We have some incredible, stiff competition but, from Friday to Saturday to today, nobody had a better racecar because, in my opinion, nobody has a better team. To do it in this fashion, it’s a couple ways – this is the Dodge Mile-High Nationals powered by Mopar and Pennzoil, and we’re the 1320 Scat Pak R/T car…. To me, this win is bigger than winning the U.S. Nationals. Winning on The Mountain is doing something. The glory goes to God, it goes to Don Schumacher for giving me an incredible team, and everybody at Don Schumacher Racing who build these racecars giving me something so safe, so solid.”

The Dodge team is very pleased with the race results, from Leah’s win to the debut of the 2019 Dodge Challenger R/T Scat Pack 1320. Steve Beahm who oversees Dodge//SRT and passenger cars for Chrysler and Fiat says, “The victory today by Leah Pritchett and the Don Schumacher Racing team puts a perfect ending on our brand’s first year as title sponsor of the Dodge Mile-High NHRA Nationals Powered by Mopar. From the reveal of our new Dodge Challenger R/T Scat Pack 1320 for grassroots racers, to the competition debut of the new Mopar Dodge Charger SRT Hellcat Funny Car body to the winner’s circle on Sunday, this was a dream weekend for the Dodge and Mopar brands.”

More Nervous About Debut than the Race

Ironically, Pritchett told me that driving the 2019 Dodge Challenger R/T Scat Pack 1320 for its debut made her more nervous than racing. Pritchett told me “I don’t typically do a burn out up a steep grade and I didn’t want to hit Matt’s new car.” She was referring to Matt Hagan’s new 2019 Mopar Dodge Charger SRT Hellcat NHRA Funny Car body that also made its competition debut this weekend.

The new 2019 Dodge Challenger R/T Scat Pack 1320 is the vehicle that Pritchett did the uphill burn out in. The 1320 stands for the quarter mile distance. This new version of the popular Dodge Challenger is designed for the grassroots drag racer. It is set up for racing, with a drag mode, line lock, and special brakes to take full advantage of its HEMI V-8 that gets 485 horsepower and 475 lb.-ft. of torque. Best of all, the 2019 Dodge Challenger R/T Scat Pack 1320 is street-legal. Fuel economy should be released closer to when the vehicle will be in showrooms.

The 2019 Dodge Challenger R/T Scat Pack also carries a special logo called the “Angry Bee”. The “Angry Bee” plays off the famous Super Bee logo from back in the 70’s. The “Angry Bee” is ready to sting the other drivers at the track.
Pritchett added that she was “Really proud and excited that they asked me to drive the Challenger for its debut. There are other great drivers here and to be able to add something is fun.”

Pritchett added a lot to the Dodge Mile-High NHRA Nationals Powered by Mopar this weekend and it indeed looked like fun!

LG's New EV Battery Plant Is a Welcome News for Tesla
Tesla Giga Berlin's New Hurdle: It's Not Only the Gov't, but Now Tesla Itself
END_OF_DOCUMENT_TOKEN_TO_BE_REPLACED