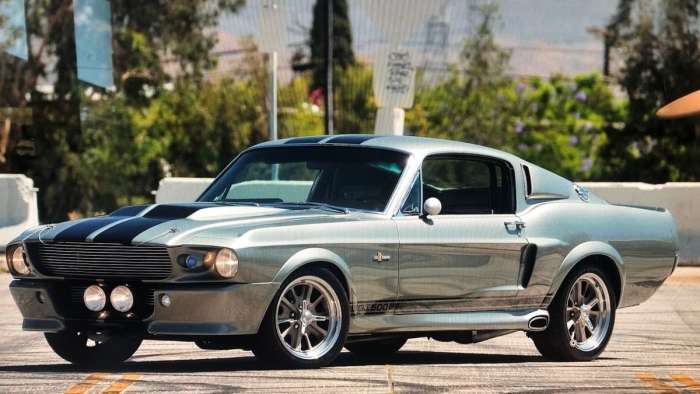 One of the eleven cars used for the classic movie "Gone in 60 Seconds" is heading for the auction block. It is in immaculate condition.
Advertisement

Meet one of the most spectacular movie cars of all time. This is the 1967 Ford Mustang known as "Eleanor." In the documentation, this 1967 Ford Mustang beauty is known as “The Dream Car”. It is one of the original 11 cars built for use in the 2000 film “Gone in 60 Seconds”. The 5-speed vehicle comes complete with the 351 351 Cl V-8 engine. It is gray with a black interior.

One of the Original 11 Eleanors Used During Filming

One of the most iconic vehicles in movie history, the 1967 Mustang recently underwent a full rotisserie restoration by Cinema Vehicle Services of North Hollywood, California. Cinema Vehicle Services built all eleven cars for the movie. Not only does this particular Eleanor look brand new but it has only 90 miles on it since it was entirely redone.

How You Can Buy the Iconic Eleanor Mustang

The stellar 1967 Ford Mustang “Eleanor” will be sold at a Mecum Auto Auction in Kissimmee, Florida, in January of 2020. According to the studio set list provided to Mecum, the “Dream Car” was used in various interior and exterior film scenes from the Shipyard, City and River Chase scenes.

The Mecum information says the 1967 vehicle has a Blueprinted HiPo 351 Cl V-8 engine. It also features aluminum heads and a roller camshaft. It has the best performance features an owner could wish for including an Edelbrock Performer intake. The headers and stainless side-exit exhaust are attached to Magnaflow Mufflers.

The 2000 Touchstone Pictures movie made Angelina Jolie, Nicholas Cage and the 1967 Mustang, affectionately called Eleanor, all stars in their own right.

All of the Latest Performance Accessories

Eleanor should handle like the Dream Car she is, she has power steering, Aluminum pedal covers and when you need to slow her down she has Wilwood disc brakes.

Just like in the movie, the 1967 Ford Mustang is Pepper Gray Metallic with black stripes. They topped off the incredible package with a LeCarra wood-rimmed steering wheel and Custom 10-spoke wheels with spinners.
The 1967 Ford “Eleanor” Mustang will be sold as one of the main attractions at the Mecum Kissimmee Auction, January 2-12, 2020. For more information on the auction, click here.

Tsingshan's Threat to Tesla: EV Maker Is In Battery Crosshairs
Tesla-Funded Research Reveals One of The Biggest Mysteries of EV Battery
END_OF_DOCUMENT_TOKEN_TO_BE_REPLACED