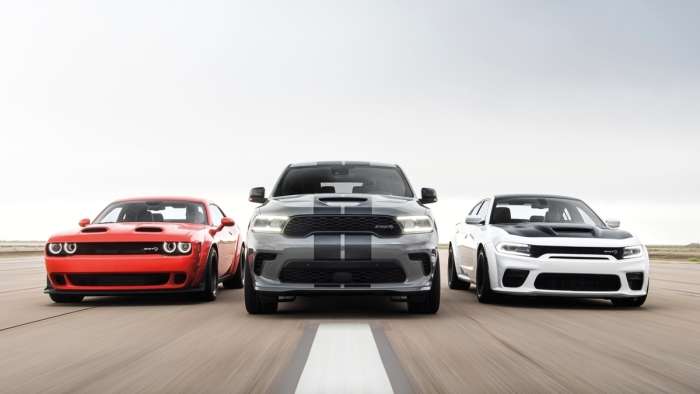 Dodge has 25 different influencers who get to choose who should win their Dream Dodge car. We have details on who you need to convince to win your very own Hellcat!
Advertisement

We now know how you can get the opportunity to win your own Dodge dream car. When Dodge announced its Operation 25//8, as part of its ‘Never Lift’ campaign, the company said it was looking for people who push harder, run faster and over-deliver on behalf of Dodge and the Brotherhood of Muscle. Over the next eight weeks, contestants will be trying to convince 25 different Dodge ambassadors why they deserve to win their very own Dodge Challenger SRT Hellcat or perhaps, a Dodge Charger SRT Hellcat.

“To recognize the Dodge spirit, the belief that 24 hours a day, seven days a week simply isn’t enough effort, Operation 25//8 will enlist a team of 25 people and companies that are all superstars in their fields, including Amazon, Travis Barker, Jay Leno, Cain Velasquez, Supercar Blondie and Draft Kings, to give away 25 Dodge dream cars during the last eight weeks of 2021,” said Tim Kuniskis, Dodge Brand CEO. “Operation 25//8 adds 20,000 horsepower to the Brotherhood of Muscle and is the first step in building awareness for our two-year transition plan to redefine the future of American muscle.”

Dodge kicked off the eight-week 25//8 contest with this video.

How the Contest Works

Dodge has selected 25 different ambassadors from the worlds of music, automotive, media, sports and fashion. Fans are supposed to follow their favorites, or all of them, to find out more about the 25//8 initiative. The ambassadors will be posting on social media like YouTube, Instagram, Twitter, TikTok and Facebook. Each influencer will ask fans to tell them, in 250 words or less, why they should be the recipient of a Dodge dream car. The 25 winners can order a new Dodge Charger, Challenger or Durango. Dodge even tells you how to follow the 25 influencers who will each be overseeing a free vehicle.

Amazon will be giving away a Dodge Challenger Hellcat. Customers can visit this Amazon page and sign-in for a chance to build and take one home.

Dodge provided the photo used in this story.

LG's New EV Battery Plant Is a Welcome News for Tesla
Tesla Giga Berlin's New Hurdle: It's Not Only the Gov't, but Now Tesla Itself
END_OF_DOCUMENT_TOKEN_TO_BE_REPLACED