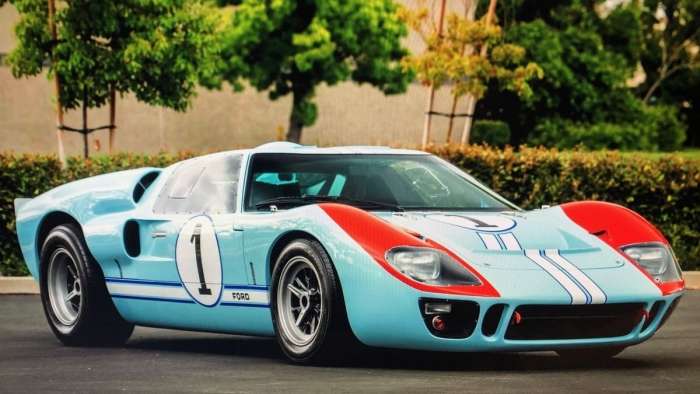 Christian Bale drove it in the movie Ford v Ferrari and now you can own it.
Advertisement

This 1966 Superformance Ford GT40 is one of two that were built for the movie “Ford v Ferrari”. It is known as the hero car because it is the one that Christian Bale drove during the filming. It was specially built to replicate the 1966 Ford GT40 MKII that Ken Miles drove in the 1966 24 Hours of Le Mans.

This 1966 Ford GT40, painted in the legendary 1966 Blue No. 1 livery, made red carpet and television appearances advertising the movie and now you can have it in your garage. You just have to be the top bidder at an upcoming Mecum Auction.

According to the information in the Mecum brochure, this vehicle was built at Superformance in Irvine, California.

This car is titled as 0000 Special Construction. It is a right-hand drive vehicle.

The movie traces how Henry Ford II, known as “The Deuce” became obsessed with beating the Ferraris in the race known as the 24 Hours of Le Mans. Race car driver Ken Miles worked with Carroll Shelby to design a race car that could go faster than the Ferraris and also endure the brutal 24-hour race. The Ford cars finished first, second and third in the history making race.

Superformance shows incredible attention to detail, building a GT40 that emulates Ken Miles’ original race car. Everything is said to appear authentic and correct in appearance as possible. The toggle switches and screws, interior materials are so perfect that the vehicle was used for close ups during the filming.

This Mecum auction will be special for anyone who loves fast cars and movies. I think that pretty much covers all of us.