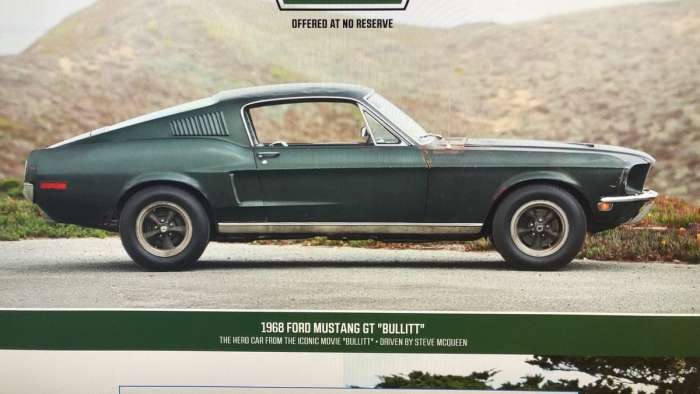 Here's Your Chance to Own the Iconic Bullitt Mustang

One of the most famous movie cars of all time is headed to the auction block.
Advertisement

The car chase in the movie Bullitt is considered one of the greatest of all times and the 1968 Ford Mustang GT, known as the Bullitt Mustang, will forever be remembered for that incredible chase scene. Now the car driven by Steve McQueen in the iconic movie Bullitt will be going up for auction.

The 1968 Highland Green Ford Mustang GT that has been identified as the “Hero Car” used in the actual filming is scheduled to be sold at no reserve during the Mecum Auction in Kissimmee, Florida, in January of 2020.

Back in 1968, a ten-minute chase scene was unheard of, especially with the lead actor actually driving the vehicle. Steve McQueen, a known dare devil, who loved to drive helped craft many of the aspects of the chase. Warner brothers bought two Highland Green 1968 Mustang GT 390 Fastbacks from Ford with back-to-back serial numbers, both with 390/325 HP big-block V-8s and 4-speed transmissions. The cars were specially modified to withstand the grueling filming. The cars’ suspensions were strengthened, special shock absorbers were installed and camera mounts were added inside and out. The other Mustang was supposedly so badly damaged during production that it was scrapped.

Following the movie production, a studio employee bought the car. He later sold it to a cop. All of the history is perfectly documented. Next, the iconic car was sold in a plain classified ad. The ad in the October 1974 issue of “Road & Track” read, “1968 ‘Bullett’ MUSTANG driven by McQueen in the movie…Can be documented. Best offer.”

According to the Mecum brochure, “The late Robert Kiernan of Madison, New Jersey, had always wanted a 1968 Mustang fastback, and after seeing the ad, he picked up the hero car for $6,000. While McQueen himself made numerous attempts to reacquire the vehicle from Robert, even offering to help him find a similar Mustang, Robert had already fallen in love with it and respectfully declined all offers. In its early years with the Kiernan family, the Mustang was used as a daily driver by Robert’s wife, who taught at a nearby school.” The car had some mechanical issues, like clutch problems and was garaged for years. Robert and his son, Sean, started bringing the car back to life after Ford brought out new versions of the Bullitt Mustang GTs in 2001 and 2008.

The 1968 Bullitt Mustang Gets Even More Star Power

After Robert died in 2014, Sean got really serious about making the Mustang roadworthy. Sean and the car became an international sensation after unveiling it to the general public alongside Ford’s third Bullitt Edition Mustang at the Detroit Auto Show in early 2018.

Since then, the iconic 1968 Bullitt has traveled extensively. It has appeared at the Goodwood Festival of Speed in Great Britain, the National Mall in Washington, D.C., and even made several appearances along the famous Route 66. The family has all of the vehicle’s documentation, including the letter that Steve McQueen sent trying to buy it.

The Bullitt Could Set Records

The 1968 Highland Green Mustang GT Fastback will be sold at no reserve during the Mecum Auction, in January of 2020, in Kissimmee, Florida. The experts expect the car to bring in millions. Some say it could be the most expensive car ever sold at auction. Mecum bills Kissimmee as the World’s Largest Collector Car Auction. Sean explained when he announced that the family was selling the car that he really liked Dana Mecum and felt comfortable allowing the Mecums to sell their prized possession.