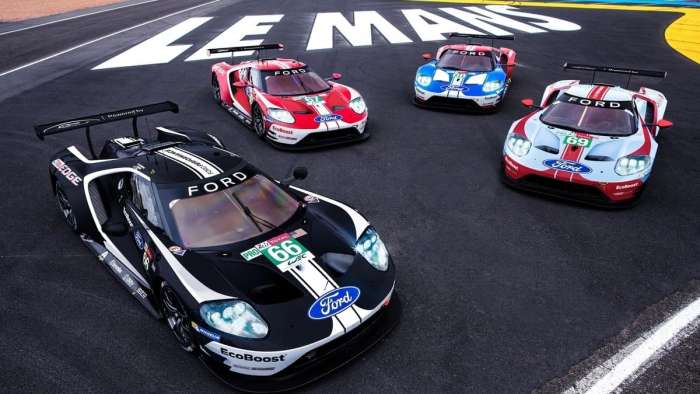 Ford is putting its Ford GT racing program in park, after this season, while it concentrates on cost-cutting. To celebrate its success in the performance car race series, Ford is using special paint schemes to pay tribute to Le Mans winning race cars. The four different liveries pay homage to Ford’s Le Mans wins, past and present. Ford stresses that it is saying “Au Revoir” to the factory Le Mans teams, not a total good bye.

“In 2016, Ford returned to Le Mans to mark the 50th anniversary of our incredible 1966 win and we celebrated in the best way possible by winning the race,” said Bill Ford, executive chairman, Ford Motor Company. “To stand on that podium on behalf of the employees was a proud moment for me and I look forward returning to Le Mans this year to support the team as we approach our final race in this chapter.”

As you can see in the pictures, the “Celebration Liveries” for the Ford Chip Ganassi Racing teams are distinctly different. The #66 Ford GT raced by Stefan Mücke (GER), Olivier Pla (FRA) and Billy Johnson (USA) has a black livery that echoes that of the Ford GT40 of Bruce McLaren and Chris Amon that won Le Mans in 1966.

The #68 Ford GT is Ford’s tribute to its most recent Le Mans winner. The Ford GT won Le Mans in 2016 and the #68 will look very similar to that version. Dirk Müller (GER), Joey Hand (USA) and Sébastien Bourdais (FRA) will race in the same colors as when it won Le Mans in 2016.

A fifth Ford GT will also be competing at Le Mans. Keating Motorsports follows a similar livery design for its #85 Ford GT. The driver line-up for the #85 Ford GT is Ben Keating (US), Jeroen Bleekemolen (NETH) and Felipe Fraga (BRA).

“The Ford GT was created to take Ford back to the world of GT endurance racing,” said Mark Rushbrook, global director, Ford Performance Motorsports. “This factory Ford GT program has been a great success for our brand and we have enjoyed the many challenges that have come our way during this four-year program.”

While this will be the Ford GTs' last Le Mans for a while, the GTs will still compete in several IMSA Weather Tech Championship races in 2019.

Ford GT is a Race Car You Can Purchase

The limited-edition Ford GTs that customers can buy are all highly prized supercars. Typically, potential buyers have to fill out a long application, go through a screening process and agree to certain restrictions to buy the car. For example, buyers have to agree to keep the vehicle for two years and agree to display the vehicle for charity events. Starting price is typically $450,000.

The 2019 Ford GT also features a special Heritage Edition that celebrates the 50th anniversary of the 1968 and 1969 Le Mans win. The customer version has the famous paint scheme, along with exposed carbon fiber accents for both the interior and exterior.

The exterior features exposed carbon fiber A-pillars and sports unique 20-inch one-piece forged aluminum wheels in high-gloss dark stainless with black lug nuts. Orange calipers and silver rearview mirror caps complete the look.
The 2018 Ford GT was rated to get about 650 horsepower and 550lb-ft of torque from its twin-turbocharged 3.5L EcoBoost V6. Top speed on the customer version is 216mph.

The Ford GTs with the special “Celebration Liveries” will start testing June 2, 2019, at Le Mans. The 24-hour will run June 15-16. Ford will also feature a livestream from the race.