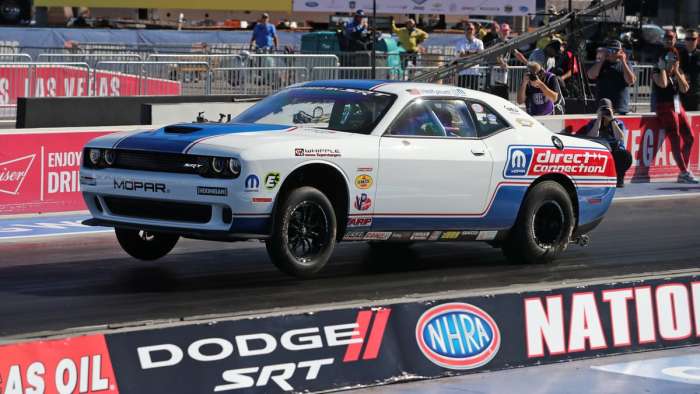 Dodge is all about huge horsepower. Now, the company is offering $10,000 purses to race in real competitions.
Advertisement

Dodge is launching a whole collection of factory-backed performance parts and race-ready kits under its Direct Connection Performance Parts line. It is also establishing special Dodge Power Brokers dealers to sell and service the performance vehicles like the 2022 Dodge Challenger and Dodge Charger SRT Hellcats. Now, as an incentive to drivers who are serious about racing, Dodge is setting up what it is calling the “Direct Connection Contingency Program to Deliver $10,000 Per Win for Dodge Challenger Mopar Drag Pak Racers”.

The Direct Connection Contingency Program is another milestone in the Dodge Never Lift campaign. Dodge laid out a two-year calendar of the brand’s performance future. The Dodge 24 Months of Muscle Never Lift calendar can be viewed at Dodgegarage.com/never-lift. Dodge has already given out 25 SRT Performance vehicles to 25 lucky fans as part of the Never Lift 25//8 campaign.

“Dodge remains committed to the grassroots racers and enthusiasts who build our brand, and the $10,000-to-win Direct Connection Contingency Program is a perfect pipeline to feed the spirit and enthusiasm that fuels us,” said Tim Kuniskis, Dodge brand CEO – Stellantis. “We’re not only offering our Drag Pak drivers Direct Connection performance parts to help them dominate, but we’re also rewarding those who compete and win with the largest contingency award available in NHRA Factory Stock Showdown and NMCA Factory Super Cars.”

Also, the Dodge 24 Months of Muscle Never Lift calendar can be viewed at Dodgegarage.com/never-lift. Don’t forget, if you want to apply for the job as Chief Donut Maker and be a brand ambassador for Dodge, you have to have your videos in by February 28th, 2022.