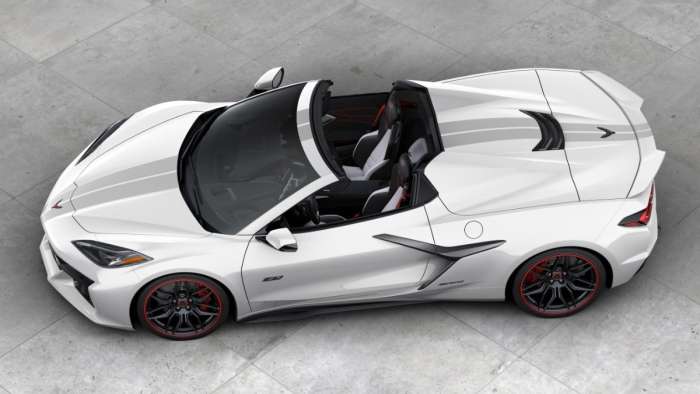 Chevrolet is releasing photos and details surrounding its 70th Anniversary Edition 2023 Chevrolet Corvette Z06. The automaker may have been forced to go public after a blogger discovered leaked photos.
Advertisement

Stakes just got a lot higher for the Barrett-Jackson Auction in Arizona, this weekend. Chevrolet is confirming the existence of a stunning 70th Anniversary Edition of the 2023 Chevrolet Corvette Z06. Chevrolet will sell the very first retail production version at Barrett-Jackson. The proceeds will benefit Operation Homefront. The non-profit helps military families.

“Passion for Corvette runs deep at Chevrolet and this anniversary is extra special because of the excitement and sales success we’ve achieved with the eighth generation of America’s iconic sportscar,” said Steve Majoros, vice president, Chevrolet marketing. “Even after 70 years, Corvette still makes hearts race and kids dream of the open road.”

Was Chevy Forced to Move Up the 70th Anniversary Edition Announcement?

Chevrolet may have decided to move up the 70th Anniversary Edition announcement after bloggers reported over the weekend about the special edition. Some quick-thinking Corvette lover caught a picture of the special ‘Vette and went public with it. The news has traveled like wildfire.

I first reported about the Barrett-Jackson auction of the first retail production 2023 Corvette Z06 on January 20th. Today, Barrett-Jackson updated its catalogue description of the vehicle to include that it will be the 1st 70th Anniversary Edition Chevrolet Corvette Z06. However, the photo still shows a Corvette in the incorrect color, so it must have been a last-minute change. 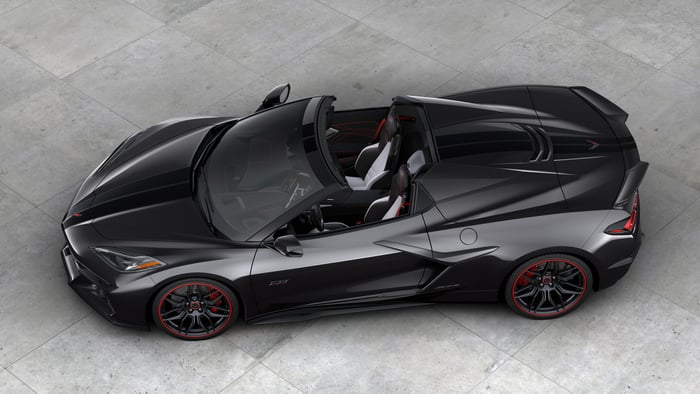 Both the 2023 Corvette Stingray and Corvette Z06 will have special 70th Anniversary Editions. The special versions will only come in two colors. There will be an all-new White Pearl Metallic Tri-coat or Carbon Flash Metallic. Optional stripes are available in complementing colors – Satin Gray with the White Pearl Metallic Tri-coat and Satin Black with the Carbon Flash Metallic.

The Special Edition Corvettes have distinct wheels with commemorative wheel center caps. Stingray and Z06 each have separate wheel designs, however, the wheels will share a similar dark finish and Edge Red stripe. They will have Edge Red brake calipers.

All 2023 Corvettes will feature a commemorative 70th anniversary interior plaque located on the center speaker grille and a graphic imprinted on the lower rear window. The special Anniversary Editions will feature extra badging inside and out.

The first-ever retail production mid-engine Corvette Z06 will be a 70th Anniversary Edition. VIN 001 of this highly anticipated special edition Corvette Z06 will cross the auction block at Barrett-Jackson Scottsdale on Saturday, Jan. 29, 2022, with proceeds benefitting Operation Homefront. Since 2017, Chevrolet has been a proud supporter of Operation Homefront. Operation Homefront helps military families overcome short-term problems so that they do not become long-term chronic issues. The non-profit provides critical financial assistance, housing and family support programs.

“We are absolutely thrilled that the proceeds of the auction of the first ever retail production mid-engine Corvette Z06 will help us help our military families overcome their financial hardships,” said Brig. Gen. (ret.) John I. Pray Jr., president and CEO of Operation Homefront. “All are incredibly grateful for the continued support of our friends at Chevrolet and Barrett-Jackson as their unwavering commitment to our important work allows us to continue to build strong, stable and secure military families so they can have the opportunity to thrive in the communities they have worked so hard to protect.”