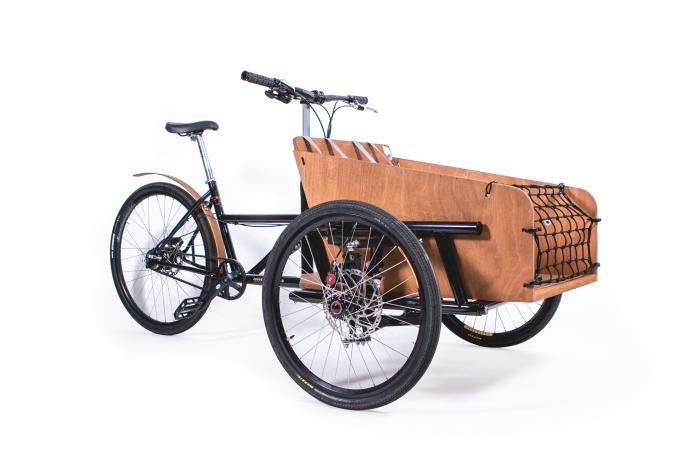 Can this new cargo bike replace your car?

Two Denver men have designed a new cargo bike. Their goal is help you avoid taking your vehicle, especially on short hops or in highly congested areas. Ford Motor has experimented with similar ideas.
Advertisement

As cities become more congested and parking becomes more expensive, more drivers are looking for ways to ditch their vehicles. Two Denver entrepreneurs have created a new bike that may answer all their needs. It is called the Juggernaut Cargo Bike, and its motto is “Built for Hauling Freight and Pushing Weight.” Engineer Mike Russell, and designer Jeff Mauck have teamed up to create the bike that would be built in America. They worked with well-known bicycle designers to streamline the vehicle. Ford Motor Company is also experimenting with using e-bikes to reduce overall traffic.

Plenty of Room for cargo

The Juggernaut Cargo Bike has room to carry two children or 300 pounds of cargo. According to the designers, the bike combines technologies like “air shocks, electric assist, and a belt drive system to make this Colorado built creation a smooth, easy and fun-to-drive bike that will have you grabbing your bike helmet instead of your keys every time.”

The Juggernaut Cargo bike is revolutionary because it uses two wheels, in front, to stabilize the heaviest part of the bike, making it easier to steer and control. The company describes it as perfect for the parent who needs to drop their children at school and then run errands. It also has plenty of room for a professional’s computer, briefcase and work accessories. It can easily be parked virtually anywhere eliminating the hassle of finding parking. It is also streamlined enough that it can be taken inside buildings and even on elevators. The designers are working on an anti-theft system to deter thieves.

The cargo bike could also easily be used by delivery services or inside warehouses or factories to transport people and parcels. It would be perfect for delivery people who have to make multiple stops in urban office buildings.

Many people are familiar with the pedicabs that you see in tourist areas or around sporting venues. This cargo bike appears to be more maneuverable and less cumbersome. The air shocks and e-assist also make the cargo bike easier on the driver.

Juggernaut is currently running a Kickstarter Campaign as it tries to raise the money to put the cargo bike into mass production.

Ford has asked its designers and engineers to envision bikes that could fit into a wider transportation system. The company envisions commuters taking trains or buses into urban areas and then using bicycles or shuttles to get to their final destinations. Engineers have drawn up designs for folding bikes and e-bikes.

A Juggernaut Cargo bike could be an interesting addition to future transportation solutions, especially in mild climates like Denver, Seattle, San Francisco and Los Angeles.