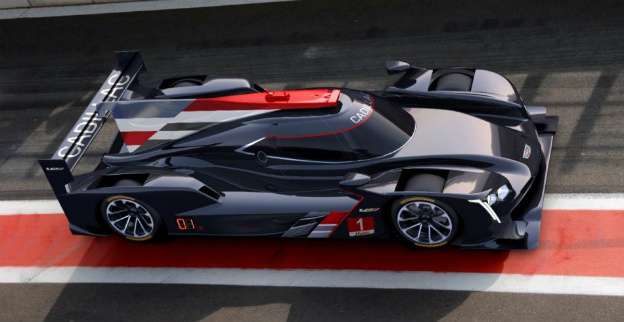 Cadillac unveiled its top-secret DPi-V.R Prototype Race Car For 2017. According to its spec sheet, the race car will produce 600 horsepower. The 2016 Cadillac CTS-V is rated at 640 horsepower.
Advertisement

The new Cadillac DPi-V.R Prototype race car is sleek and incredibly beautiful. The engineers kept the design top secret as they were building Cadillac’s entry into the 2017 IMSA WeatherTech SportsCar Championship series. It will compete in the new Daytona Prototype international class.

“Cadillac is proud to return to the pinnacle of prototype racing in North America after a 14-year absence,” said Johan de Nysschen, president of Cadillac. The Dpi-V.R is intended to highlight the Cadillac V-Performance production models — the ATS-V and CTS-V.

The Cadillac DPi-V.R is powered by a naturally aspirated Cadillac 6.2 liter V-8 engine that was prepared by the Earnhardt Childress Racing group. While it reportedly shares inherent architecture with the engines of the third-generation Cadillac CTS-V (640 horsepower) and fifth-generation Cadillac Escalade (420 horsepower), after the Earnhardt Childress techs work their magic, I’m sure it is barely recognizable.

We’ll get our first chance to see the new Cadillac Dpi-V.R in action on December 13 and 14, when it takes to the Daytona track for testing. It is scheduled to actually compete in the 55th Rolex 24 at Daytona on January 28 and 29, 2017.

Ford has had so much success with its GT supercar, it will be interesting to see if perhaps Cadillac could be testing the waters for a supercar of its own.