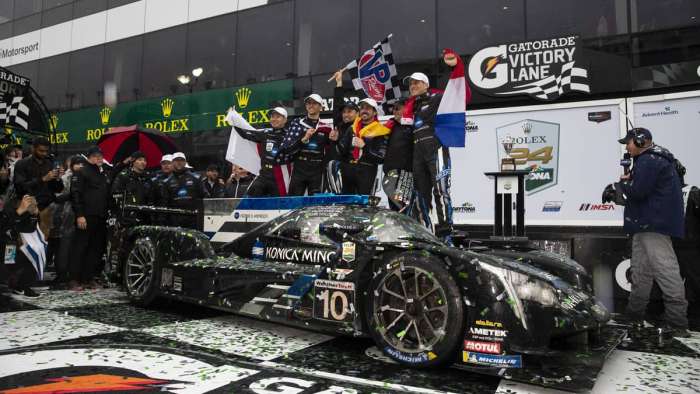 Cadillac is celebrating after winning in the DPi class in the Rolex 24 for the third time in three years.
Advertisement

In a business often judged by endurance and performance, Cadillac has plenty of reason to celebrate. Cadillac races away the winner of the 57th running of the Rolex 24 at Daytona. One of the vehicles known affectionately as “The Dark Knight” has won the race each of the last three years.

The victory is a morale booster for the brand that is currently trying to position itself as GM’s leader in EV vehicles. Cadillac has always been the brand that General Motors uses to display cutting edge technology as well as high-performance and luxury. Most recently, Cadillac unveiled its new 2020 XT6 crossover at the North American International Auto Show in Detroit.

General Motors new president, Mark Reuss, was on hand for the race. Reuss is known as a true “car and truck guy”. He often travels to races and is visible in the race track pits cheering on the team. Following the race Reuss said,
“What a performance by Wayne Taylor Racing to win the 2019 Rolex 24 Hours at Daytona. Congratulations to Jordan, Renger, Fernando, and Kamui on their performance behind the wheel of the No. 10 Konica Minolta Cadillac DPi-V.R as they battled intense competition and weather. Wayne and the engineers called an excellent race and the crew executed with consistency. The Cadillac teams and our race engineers and Propulsion engineers collaborated to give us a great start to the 2019 IMSA Prototype season.”

Rain caused major problems for the 24-hour race. The track was red-flagged and stopped for rain two different times. The race actually ended while the vehicles were parked during the second red flag.

Lead driver Fernando Alonso, who is new to the Wayne Taylor team, said after the race, “I am very proud if the job we achieve today. It was not a one day job it was a one month job. I’ve won races around the world, to add one here in America is great. I am proud of the team. I want to thank Wayne Taylor Racing, Konica Minolta and Cadillac.”

From the Race Track to the Streets

Cadillac returned to the pinnacle of prototype racing in North America after a 14-year absence back in 2017. The Dpi-V.R is intended to highlight the Cadillac V-Performance production models.

Steve Carlisle, the president of Cadillac, said “To win this event three times is a testament to the speed and reliability of Cadillac V-Performance power. Hats off to our development team internally at Cadillac, to Wayne, as well as our GM Propulsion engine team.”

The Rolex 24 is one of the first big vehicle races of the year. The NASCAR season kicks off with the Daytona 500 on February 17,2019.