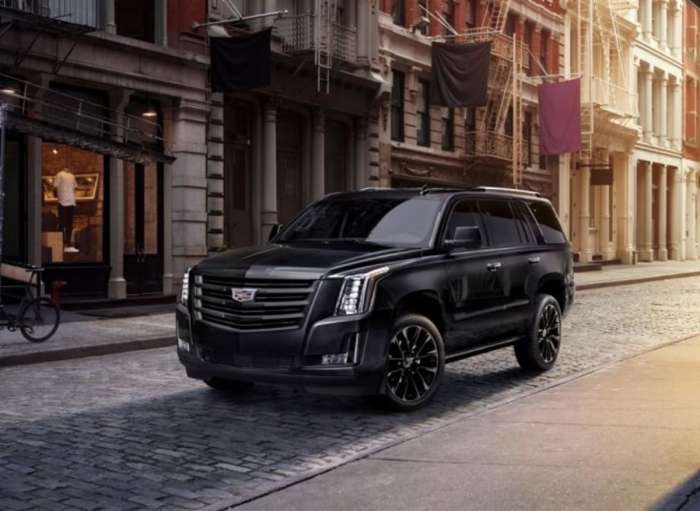 Cadillac is giving the 2019 Escalade a new blacked-out sport edition. It is perfect for the buyer that wants to add some mystery to the luxury SUV.
Advertisement

Cadillac is adding a Sport edition to the 2019 Cadillac Escalade line-up. This is the first special edition of the popular luxury SUV, and it gives the Escalade a more menacing or aggressive look. The vehicle is being shown for the first time at the Los Angeles Auto Show or AutoMobility LA, as they now call it.

“Two decades after its introduction, the Escalade remains the segment’s benchmark and sales leader,” said Steve Carlisle, Cadillac president. “The Sport Edition extends that momentum in response to customer and dealer demand for a dark and aggressive look.”

Escalade has led the full-size luxury SUV segment in sales for 15 of its 20 years on the road. It has received tough competition from the Lincoln Navigator, Mercedes and Land Rover in recent years. Nissan, Toyota, Lexus and Infiniti see the huge market available for luxury family haulers and have all brought new vehicles to the segment. Los Angeles is a huge market for the luxury SUVs, often in demand to carry celebrities and their body guards.

The Escalade’s 6.2L V-8 engine kicks out 420 horsepower. The big engine, which is in all Escalades, is popular with security personnel, who are employed to protect celebrities. Plus, the Escalade is agile enough to maneuver out of crowded or potentially dangerous situations. Escalades can go from 0-60 in less than 6 seconds. The Escalade was the first full-size luxury SUV to offer Magnetic Ride Control, the world’s quickest-reacting suspension system making it more responsive and easier to handle.

The 2019 Sport Edition carries black accents including the front grilles, window moldings, body side moldings and more, as well as a unique Midnight Silver finish on the standard 22-inch wheels. The Sport Edition package with its gloss black trim will be offered on the Luxury, Premium and Platinum models. All models can be ordered in either 2WD or 4WD.

Cadillac models including the Escalade feature the latest technology that General Motors has available. Escalades feature a 12.3-inch-diagonal instrument cluster display with high-resolution digital driver information center.
In August, the Cadillac Escalade celebrated its 20th anniversary. It wrapped itself in Cadillac luxury and was promoted as the first full-size luxury SUV, when it made its grand entrance at the Pebble Beach Concours d’Elegance in August 1998.

During the celebration, Steve Carlisle, Cadillac’s president said the Escalade continues to set the pace for luxury. “Over the past 20 years, the Escalade has prevailed not only as a highly regarded full-size luxury SUV, but also as a cultural icon that is synonymous with style and sophistication. From the highway to the big screen, the Escalade has been embraced by drivers and fans around the world.”

The Escalade Sport Edition package is $2,700, and the starting MSRP in the U.S.A. is $84,790 including destination charge. It will be available for orders beginning in early 2019. You can compare the full-size luxury SUVs here.