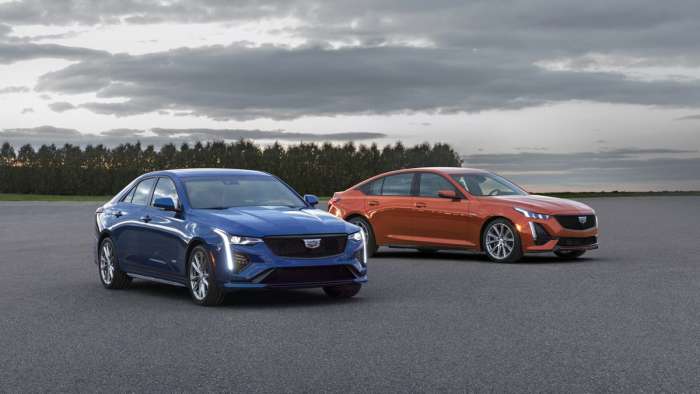 Cadillac swears it isn't giving up on sedans. It is even revealing two new high-horsepower versions of the CT4 and CT5.
Advertisement

Cadillac is trying to position its CT4 and CT5 as able competitors to the BMWs and Audis. With the addition of the all- new 2020 CT4-V and CT5-V, the Caddys are now in a position to run with the best of them.

The new sedans also include the Super Cruise enhanced cruise control system that is considered the best self-driving technology in the industry, even surpassing the Tesla autopilot system. The CT4-V and CT5-V also feature the Magnetic Ride Control 4.0 that accentuates a smoother ride and handling.

High-Horsepower for Those with the "Need For Speed"

Cadillac has been offering the upgraded V-Series for more than 15 years. The 2020 CT4-V will have a 2.7-liter turbo-charged 4-cylinder engine capable of 320 horsepower. That is great horsepower for a subcompact car.
The 2020 CT5-V will run with Cadillac’s 3.0L Twin Turbo-charged V-6 engine. It is expected to produce 355 horsepower. Fuel economy wasn’t revealed for either vehicle.

“The new V-Series sedan lineup defines modern sophistication by combining luxury appointments with thoughtful technology and athletic refinement for the discerning enthusiast,” said Brandon Vivian, Cadillac executive chief engineer. “We are inviting even more customers into the V-Series family by adding a new level of elevated performance between our Sport models and the ultimate, high-performance track capability that the V-Series has grown to represent.”

The new sedans also include the Super Cruise enhanced cruise control system that is considered the best self-driving technology in the industry, even surpassing the Tesla autopilot system. Super Cruise is the first true hands-free driver assistance feature for the freeway. The CT4-V and CT5-V also feature the Magnetic Ride Control 4.0 that accentuates a smoother ride and handling.

“The new lineup expands the V-Series ethos, drawing more customers into the Cadillac Performance family, and the newest Vs are focused on elevated athleticism and luxurious refinement for customers wanting a dynamic daily drive,” said Mark Reuss, GM president. “And this is only the beginning of the V family. Cadillac’s passion for performance shines on a racetrack. Stay tuned.”

Mark Reuss’s comment and the news release suggest that Cadillac will also be releasing another V-Series version, but doesn’t explain. The release does say that there will also be CT4 Luxury, Premium Luxury and Sport models announced later.

The CT4-V and the CT5-V will go on sale in early 2020. The sedans will be built at GM’s Lansing Grand River Assembly in Michigan. Pricing will be announced closer to launch.