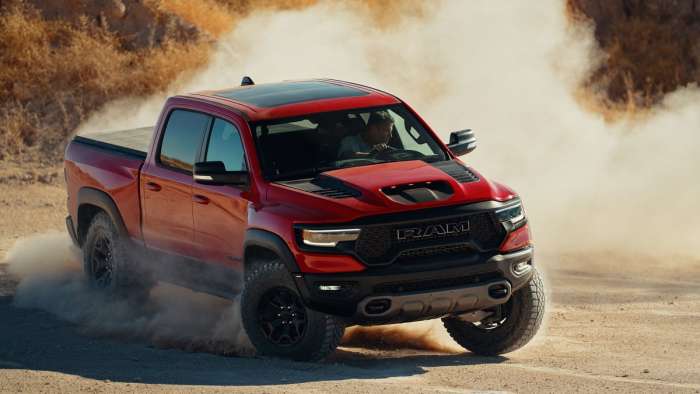 Even though most auto shows have been delayed by the Coronavirus, automotive awards still motor on. The 2021 Ram 1500 TRX is already in contention for a major award.
Advertisement

The Coronavirus has delayed virtually every auto show and forced some of the premiere shows like the North American International Auto Show to change its dates entirely. However, auto journalists are still reviewing new vehicles for potential awards. The 2021 Ram 1500 TRX has made the shortlist for one of the most prestigious awards. The 2021 Ram TRX is in the contention for the 2021 North American Truck of the Year.

This will be an extremely tough contest this year. The four semifinalists in the truck category are:

Truck fans have been waiting for the Ram TRX since the truck was shown as a concept in 2016. Ram is promising the 2021 Ram TRX will be the fastest and most powerful mass-produced truck on the market. The 6.2-liter supercharged HEMI V-8 will deliver 702-horsepower and 650 lb.-ft. of torque.

The Jeep Gladiator Mojave represents a new, even more rugged segment for Jeep. The new Jeep Gladiator Mojave is the first to be ‘Desert Rated’. Jeep says the new badge indicates that the vehicles “represent the ultimate in high-speed off-road capability and performance in grueling desert and sand environments.”

The all-new Ford F-150 will also be a strong contender. The redesigned F-150 comes with all sorts of new bells and whistles, including an on-board generator. Its tailgate can function as a standing desk and the Max Recline seats can even lay almost flat, giving the driver an option for a nap.

The fourth competitor is the Ford Super Duty. The Super Duty is considered a fabulous work truck, built for hauling whatever the driver needs. The 7.3-liter engine in the Super Duty pickup powers a best-in-class gas V8 output of 430 horsepower at 5,500 rpm and best-in-class torque of 475 ft.-lb. at 4,000 rpm.

According to the North American Car, Utility and Truck of the Year website, this year’s semifinalists were picked by a jury of 50 respected jurors from print, online, radio and broadcast media across the U.S. and Canada.

This week the jurors have the chance to drive the vehicles and do side by side comparisons. The journalists will then narrow the list even further.

The NACTOY awards used to kick off the North American International Auto Show in Detroit. The NAIAS show has now been moved to later in the year. The new NAIAS dates are Sept. 28 – Oct. 9, 2021.