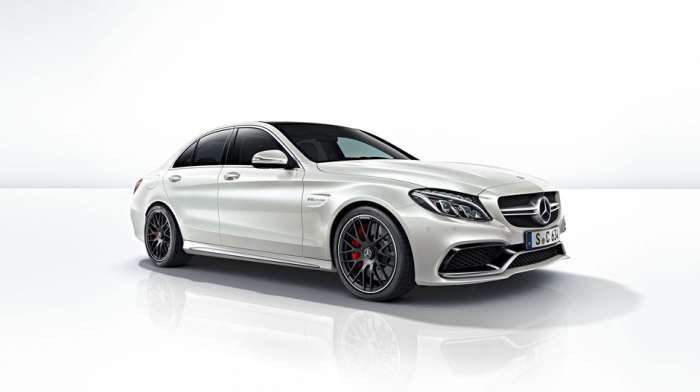 2015 Mercedes AMG C63 Could Be The Best Euro Performance Value

Affalterbach's answer to the M3 trumps the BMW in power and style. With performance on par with its Munich competition, the C63 may be the performance choice in European sedans.
Advertisement

Arriving in showrooms any day now, the Mercedes AMG C63 comes in two performance variants, each powered by a version of the new 4.0 liter biturbo engine found in the Porsche 911 competing Mercedes AMG GT. Power output comes in at 469 horsepower in the C63, while the C63 S model ups the ante to 503 horsepower. Mercedes claims that the sedan will have the most fuel efficient eight cylinder engine in its class, which is impressive considering the prodigious power available to your right foot in either model. With 0-60 times estimated at 3.9 seconds, it’s only a 0.1 of a second off those stated by BMW for the M3.

The interior promises to be a step up from its counterparts as well. The typical craftsmanship of AMG should provide a nice place to be, whether on the track or during an extended drive. Both models will come with a litany of driver aids and technologies, including AMG Dynamic Select which delivers variable driving modes and allows the pilot to determine the forces at work though the steering, suspension and power delivery.

The AMG Speedshift MCT 7-speed sport transmission coupled with a limited slip rear differential should provide the driver with good torque throughout the RPM range. As usual with AMG, there are no manual transmissions available on either model. The C63 will initially be offered in rear-wheel drive only, but don’t rule out a 4MATIC all-wheel drive version down the road, as AMG has done with its other models like the E-class. A coupe and convertible derivative will most likely make an appearance over the next year or two.

Expect to see the new Mercedes C63 and C63 S at your local dealer in the next few weeks, with the C63 starting at $64,825 and the potent 503 horsepower C63 S-model coming in at a base price of $72,825. Although they are not cheap, in the realm of high-performance, luxury sedans, they may just provide the best bang for your buck, especially considering all the amenities and claimed best in class fuel economy.