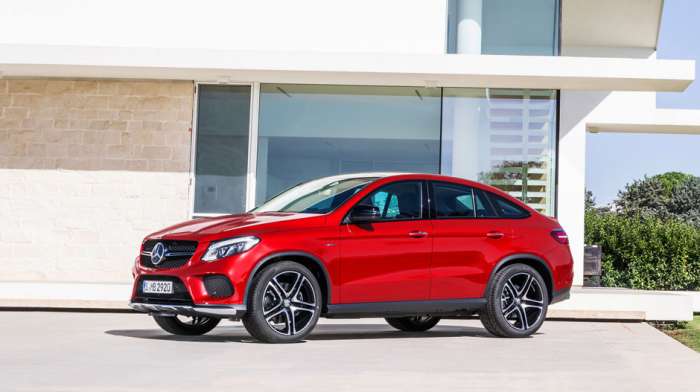 2016 Mercedes AMG GLE63 Coupe Is Taking the Fight to BMW

Don't look now, but BMW is getting some serious competition for its X6M. The new 2016 Mercedes AMG GLE63 Coupe is bringing the heat.
Advertisement

Let me begin by saying that I have a fondness for these new breed of sporting and powerful SUV’s. While many think of them as bulky and overpowered, I think they are the greatest compromise for the modern auto enthusiast. You have room for a family of 4, cargo space for the groceries or a summer trip and the power to keep up with many of today’s sports cars should you find yourself needing some extra power at the occasional stoplight.

Cue the 2016 Mercedes AMG GLE63 Coupe, with 549 horsepower and 516 lb-ft of torque produced by a 5.5 liter twin turbo engine, it will be one quick behemoth. This sleek SUV will quickly become a favorite choice of those looking for style and quickness for their daily commute, but need room to haul the kids to soccer practice. It really is a supreme blend of utility and that is just the pedestrian version. AMG also have the GLE63 S, which ups the ante to 577 horsepower and a mind melding 560 lb-ft of torque. Both versions are extremely quick, with the regular version said to hit sixty in 4.3 seconds, the S does it a tenth quicker. That’s good enough to beat the newly introduced 2015 Mustang GT and should you splurge for the S model, enough to keep up with a buddies 2015 Porsche 911. Its seven speed transmission, 4Matic all-wheel drive and meaty 285/40 front and 325/35 rear tires certainly pay dividends.

The interior is classic Mercedes AMG, complete with a leather-wrapped flat bottom steering wheel and carbon fiber touches abound. If you were to be placed in the cockpit without knowing what vehicle it was, an SUV would be your last guess. Everything about it screams luxury and performance, exactly what you would expect from its birthplace in Affalterbach.

Scheduled to land in showrooms by August, you can expect to have a much lighter wallet should you drive one off the dealer lot. Pricing should be well over $100,000, as the previous ML63 AMG models, which the GLE63 is replacing, started just shy of that mark. One thing you can be sure of though, the boys at BMW will be looking in its rearview mirrors because the GLE63 will be coming up quickly.