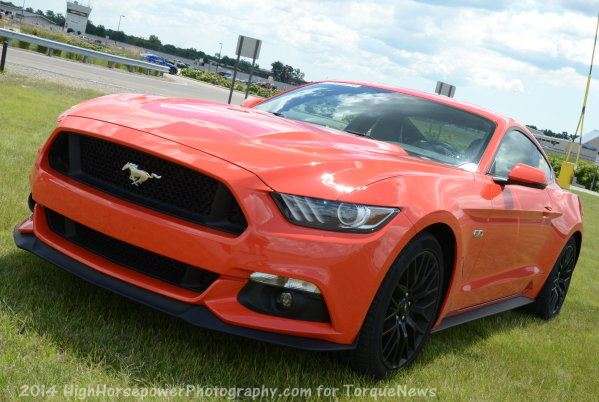 Those print publications who were the first to sample the 2015 Ford Mustang GT have published their results and while the figures that we are seeing across the internet vary by source, the quickest reported times thus far come from Motor Trend, where they hit 60 in just 4.4 seconds en route to a 12.8 quarter mile – making the 2015 model slower than a similarly equipped 2014 model.
Advertisement

While we are certain to see better stock numbers once the 2015 Ford Mustang GT reaches the hands of owners who have a chance to get plenty of seat time in the new pony car, these first published numbers serve as a great benchmark of the 2015 Mustang performance levels. However, the first reports from some sources might not be the glowing numbers that some Mustang fans were expecting, as the reported figures from some sources are actually slower than the previous generation Mustang GT.

As you can see, Motor Trend turned in the quickest performance figures for the 2015 Mustang GT this far and, fortunately, I was able to find tests for a comparable Mustang from the previous generation. With the 6-speed manual transmission, MT was able to get the 2013 Mustang GT from 0-60 in 4.3 seconds while running a 12.7 quarter mile.

That’s right – the 2015 Mustang GT is slower than the outgoing models.

This shouldn’t come as a huge surprise, considering that the 2015 Mustang GT has picked up almost 200 pounds for the new model year while “only” gaining an additional 15 horsepower. However, some had hoped that Ford had found a way to improve real-world performance even with the added weight.

The 2015 Mustang GT Offers Improved All Around Performance
So based on these first few reviews of the 2015 Ford Mustang GT has gotten a little slower in a straight line. That is a bummer for so many drag racers out there, but there is some good news for those who want their pony car to handle as well as it accelerates. Thanks to the new independent rear suspension setup, Motor Trend was able to get significantly better handling figures out of the 2015 Mustang GT compared to the previous generation.

In other words, while the 2015 Ford Mustang GT has gotten a little slower in a straight line, the improvements to the chassis and suspension setup have made the next generation Mustang a better all-around performance car that will work to debunk the myth that American cars are only good in a straight line.

Again, I am certain that private owners will be able to turn in better numbers than those posted by the magazines, but the drop in performance of those published numbers from the last generation to this new generation is likely to draw some harsh criticism from fans and, unlike those folks complaining about the looks of the 2015 Mustang GT, these complaints are valid.