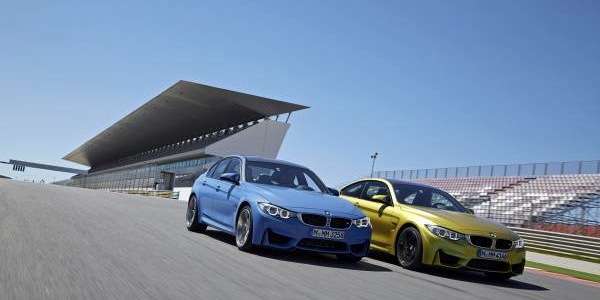 The 2015 BMW M3/M4 twins have had quite a year in 2014 and scored impressive multiple awards. The new M3 Sedan and M4 Coupe performance machines have impressed both buyers and experts this past year. When they were revealed at the NAIAS in Detroit earlier this year, it was the beginning of a new era when the twins received a new inline six-cylinder TwinPower turbo engine and a new lightweight design that lowered the weight by 80 kg over the outgoing M3. The die was cast and the twins are already making history.

The BMW M3/M4 made their dealer launch in June and the new sedan and coupe were immediately sent to first place by readers of trade magazines. Both high-performance models received the “sport auto Award 2014” awarded by “sport auto” and the accolade “Sportscars of the Year” given by “Auto Bild Sportscars.”

The BMW M3 Sedan and the BMW M4 Coupe both boast an impressive power
output of 431 hp. Its peak torque of 406 lb-ft is available across a wide rev band and outstrips the figure recorded by the outgoing BMW M3 by roughly 40 percent. Even with the increase in power, the new inline six-cylinder TwinPower turbo engine achieves a reduction in fuel consumption and emissions of around 25 per cent. Both the BMW M3 Sedan and BMW M4 Coupe will sprint from 0-62 mph in 4.1 seconds (with the optional seven-speed M Double Clutch Transmission).

Part of the reason for the impressive performance and fuel efficiency is the result of weight reduction. The low weight is owed mainly to the use of carbon, which underpins BMW’s global leadership in the processing of this high-strength, light material. The new M4 sees "rotating weight" reduction in the new one-piece carbon fiber driveshaft, crankshaft, pistons, wheels and flywheel. On the outside, the performance car's weight is reduced in the front for better weight distribution. It gets a new aluminum hood, aluminum front fenders and electromechanical power steering system (EPS).

The original philosophy of the M3 was to provide a good daily driver that owners could also take to the track. BMW’s M division developed the new TwinPower inline six, brakes, cooling system and suspension to provide a very emotional enjoyable daily driver and a monster on the track. That’s still the philosophy we see in the newly redesigned 2015 BMW M3/M4 performance cars. Look for more awards to come in 2015.

captbilly wrote on December 29, 2014 - 8:53pm Permalink
Was this written by BMW? It feels like an article promoted by a PR firm, not a review of a car. Look, I have an M3 (the older V8 version) and it is a great car but my enjoyment of my BMW doesn't mean that I will just accept without question a propaganda piece from BMW. Let's have some self respect Denis.
Morgan wrote on December 29, 2014 - 10:48pm Permalink
Looks like someone bought an m3 before the refresh and is bitter. Better luck next time dude.