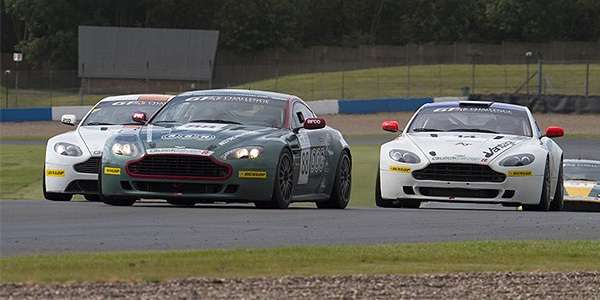 With the launch of the Aston Martin GT4 Cup in 2015, Dunlop Motorsports has been selected to be the official Tire partner for the upcoming season - an exclusive new UK GT4 race series that is specifically designed for the Aston Martin V8 Vantage race cars.
Advertisement

Aston Club Racing known for their experience in the industry of organizing racing series for both past and present Aston Martin models, the GT4 season will comence with a full calendar of events across the United Kingdom that will be heavily promoted through many venues of advertising.

With the new partnership, Dunlop will supply the latest 2015 required GT tires for the Aston Martin Vantage GT4 race cars competing in the series. Also included in the deal Dunlop will also provide technical support and expertise by their engineering staff at each race and its fitting service as well.

To ensure Dunlop could provide a winning product to the series, the latest required and specification GT4 tire has evolved through testing, with an appearance in the most enduring and demanding races of all recently, in the Nordshileife at the Nurburging on the 24th, taking a class win at the event.

James Bailey, director, Motorsport Communications at Dunlop stated: “We are delighted to have been chosen as tire partner for this important and prestigious series. The Aston Martin GT4 Cup will not only play an important role in UK motorsport in developing the International GT drivers of the future, but in also providing a strongly promoted, premium, high profile series for amateur racers. The new series also marks a welcome return for the world of Aston Martin GT4 racing to Dunlop after one year with one of our competitors; and is testimony to the professional service and tire performance that we offer. Having previously worked closely with Historic Promotions in promoting major racing events, we are confident that Duncan Wiltshire and his team will be able to grow the grids and attract new competitors to race the GT4 Aston Martin V8 Vantages.”

Scheduled to race in venues across the United Kingdom from the Donington to the Silverstone which is regarded as a classical European race circuit, but is also the cradle of Formula One. The Aston Martin GT4 Cup series is expected to further enhance the brand in the racing industry moving forward into the future. Aston Martin, continuing to evolve the British born brand hopes to raise the profile with the GT4 Cup series in 2015. Will this be a winning partnership for both brands on and off the track? What do you think?