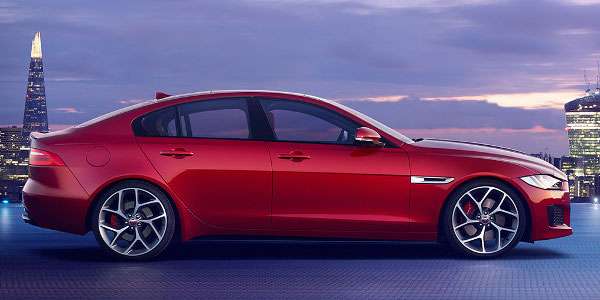 Coming out of the economic downturn over the past few years, Jaguar is posting some very good numbers in the sales and growth departments.
Advertisement

I’ve discussed the spark in sales and the excitement the Jaguar brand has generated in the last couple of years partially due to the new F-Type and the improved quality and reliability of the entire vehicle lineup. This improvement is almost a 180 degree turn around from where the company was in 2010 when they sold less than 43,000 globally. Now they have built themselves into a brand that’s not afraid to take on the big three from Germany.

The XE is poised to jump into the midsize market with the BMW 3-Series, the Mercedes-Benz C-Class and the Audi A4. Jaguar hopes their new lightweight aluminum platform and the new fuel-efficient engines are just the weapons needed to battle the competition with some powerful punches!

The Jaguar brand has made some major investments in products, manufacturing plants, and underpinnings and 2015 could be a breakout year for them. But they also have some unknowns such as the company’s manufacturing expansions into China where the Jaguar brand is not as well known. The Jaguar XE will be built at the new JLR factory in Changshu China alongside other models from Land Rover. Also the premium XF model will be replaced with a lighter weight model utilizing the aluminum platform, as well as Jaguar’s first SUV which is scheduled to be revealed at the Detroit Auto show this month. If these carefully planned strategies prove to be successful, Jaguar should see the rise in numbers they are hoping for.

It’s about time the British carmaker makes some fresh new moves; the marque turns 80 years old this year and is showing no signs of slowing down. During the Ford and India’s Tata Motors years the brand suffered and now it is time for the British brand to make some waves and up their game a bit. Jaguar sales reports are showing that the 80,000 sales in 2014 may top 112,000 in 2015. However, Jaguar only accounted for one-fifth of the total JLR (Jaguar Land Rover) sales last year, but with the upcoming XE and new SUV, Jaguar should provide just the right amount of jabs and power punches needed to knock out the competitors.

If I was a weather man, I’d say the forecast for Jaguar sales is expected to be strong and heavy with possible thunder and lightning. JLR has just recently revealed some of the projected sales numbers and their goal is to reach 850,000 by 2020. If these goals are to be met, Jaguar will be expected to hit 2015 hard and never let off the gas. It’s an exciting time for the British car maker as we see even more incredible vehicles from one of the most improved car builders in recent years.