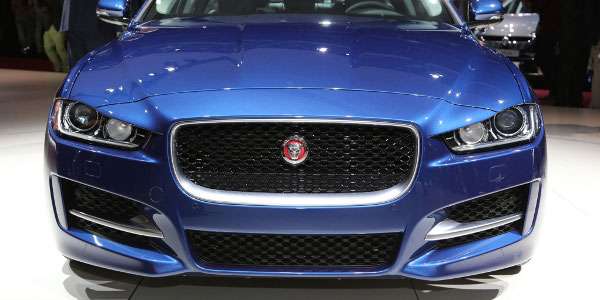 It’s a long way to the top, but Jaguar is ready to leap

Jaguar is banking on continued success with their new car lineup and with the tools the all-new XE is equipped with it sounds more like a futuristic fighter jet ready for takeoff!
Advertisement

As I stated in part 1 of my 2015 forecast for the Jaguar brand, the consumers today are hard to please and they want more for their money. The compact sports sedan has become more of a luxury line than in years past and they expect more refinement and sophistication in the car they drive. The premium materials used inside the XE along with the infotainment system (8 inch touch screen) will help to scale this smaller sedan up a bit. Multiple screens will also show additional functions like apps, surround view camera, integrated Wi-Fi hot-spot, navigation, phone, audio, and climate controls.

The high-tech is not just limited to the interior; Jaguar is ready to present the future with the kind of sedan they want to drive. Almost 75% of the body and suspension construction is made of high strength/lightweight aluminum alloy. The XE will also employ Jaguar first use of an electric power steering system which will give the driver multiple driving modes including a sport option. And the driver can also choose to buy an eight-speed automatic or six-speed manual transmission.

Owners can also choose to equip their new XE with an integrated laser-based heads-up display (HUD) that will show specific driver assistance features making it safer and more efficient to navigate traffic. The ability to display outside climate, roadway conditions, images, vehicle information, directions, and points of interest to the driver with taking his eyes off the road, may change the way we commute. Sounds more like an advanced fighter jet than a sports sedan and Jaguar is ready to take on the world in this all-new high-tech cat.

Lee Iacocca when he was dreaming and laying the ground work for building the first Ford Mustang in the early 60’s was thinking outside the box. He was preparing to design and build a car for a generation that was not even driving yet. When the car released in 1964 it was a huge success and everyone lined up to buy it. The key was having the vision to see what was going to be the next big thing and build one for the consumer. Jaguar needs to look down the road at what the automakers could do next, and build it now! This forward thinking and future focus will help Jaguar to rise to the top and by then they will be so far ahead of the competition it will be impossible for anyone to catch them.

In case you are still not sure the 2016 Jaguar XE is packing the punches to get in the ring with the big boys, how does 75 mpg sound? I’d say that sound too good to be true, it sounds like a figure that might be achieved in a few years from now. Well…..maybe that’s what they want the competition to think.

mb wrote on December 27, 2014 - 5:58am Permalink
I'm looking forward to the test drive by the various magazines to see how this fairs with the others. I've seen this car driving around and if I'm honest it didn't wow me that much. the rear end seems very short and it doesn't seem to complement the long front. if it was maybe about 4 inch longer then it would have looked good. technically with all the aluminium it didn't seem to offer the weight advantage that one would have expected, personally i expected at least 150 to 200kg weight saving and substantial increase in engine economy but the only thing going for this is the appeal and driver dynamics. My only criticism is that Jag didn't offer an estate version at the same time of launching the XE and i feel its a big mistake. The XF estate is proving quite popular in UK and personally it's a lot better looking than the saloon, with a sports body kit its even better. I think they had a perfect recipe here with the XE to bank on young owners who have a growing family and would like an estate that's quite unique. for whatever reason Jag management feel there isn't a big enough demand to justify spending money to make an estate. pity... lets hope that changes
Joseph wrote on December 31, 2014 - 5:08pm Permalink
Yes,I guess Jaguar has to make those tough decisions but the XE looks good to me!

LG's New EV Battery Plant Is a Welcome News for Tesla
Tesla Giga Berlin's New Hurdle: It's Not Only the Gov't, but Now Tesla Itself
END_OF_DOCUMENT_TOKEN_TO_BE_REPLACED