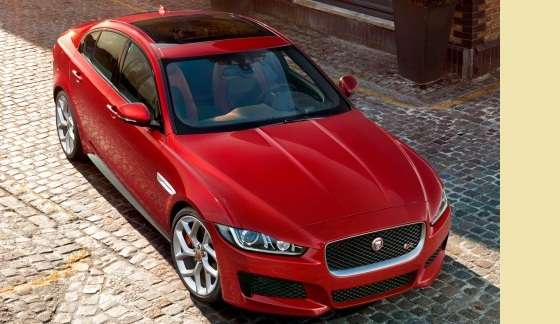 Jaguar’s all new XE will rewrite the compact sports sedan rulebook and raise the bar to a new standard in luxury performance.
Advertisement

Jaguar is poised to enter the race with a “Supercharged” sedan but the competition in this battle is stiff and the competitors are ready for a challenge. With the new XE, Jaguar is excited to complete the XF and XJ sedan lineup with an all-new compact premium sport sedan and it’s coming to the US in 2016. Will the secret weapon give Jaguar enough to finish first?

If Jaguar wants to earn its place in the world of luxury sport sedans they have to bring out the newest performance and technology hardware. Final plans for the power plant for this XE sedan have not been set but rumors are swirling that Jaguar might have made the engine bay large enough to squeeze in the Supercharged V8 (550 horsepower beast). Even if they make the flagship engine the Supercharged 5.0 liter V8 (470 horsepower) used in the XF, it should be more than enough to challenge the BMW M3 and the Mercedes-AMG C63, who seem to be in charge of this class.

According to JaguarUSA.com the company feels like a new Jaguar is needed for a new generation, so they are pulling out some new technology. Jaguar states this car is “The first of a new generation of cars to be launched on a state-of-the-art, all-new Advanced Aluminum Architecture developed by Jaguar. The lightweight aluminum construction creates an incredibly strong body, as well as helping to deliver power with responsive handling and refinement with beautiful design”. This car promises to offer a new enhanced driving experience that’s like no other compact sports sedan. Jaguar says, “The XE rewrites the rules and is a wakeup call for every other car in its class”.

Because the XE is a Jaguar, it brings a lot of style and elegance to the table- but don’t be fooled by the smaller size because it still packs in all the latest goodies from the British Sports Car Company. The expansive list includes All Surface Progress Control (ASPC) for traction control, Torque Vectoring Braking for better control during high spirited braking, Electric Power Assisted Steering (EPAS) offers advanced feedback and control when needed, and Jaguar Drive Control allowing the driver to select various modes to enhance the driving experience, to name a few.

This video explains Jaguars’ expansive engineering and advanced design behind the integral link rear suspension, that just may be the secret weapon that will have the completion scrambling to match. The lightweight but stronger components will offer the control and precise handling normally found only in higher end cars. The front suspension uses the double- wishbone setup, which is also used in the Jaguars’ flagship F-Type Coupes.

Jaguar plans to hit the compact sport sedan class with the intent of being the best. And with the current trend of classy and competitive vehicles I’d say they are the early front runner. The company is looking to bring back that “WOW” factor to their cars and make folks take notice when they see a new Jaguar on the streets.

david ward wrote on November 20, 2014 - 3:52pm Permalink
I agree with the comments and cannot wait to order an XE here in the States. I was set on buying something else but the emphasis is always on performance and largely ignores safety particularly in bad weather. I have a Mustang but cannot drive it for a third of the year as it is terrible in snow and even the newest Mustang does not have AWD, Traction control or and any of the many advanced safety features of the XE. Even my 2004 X type has AWD and is great in the snow. In my opinion the XE will win out on safety and low emissions and who really cares about the top speed when you will be lucky to do 80mph anywhere in the States and get away with it for any length of time. I cannot wait to get an XE on order and intend to go to the UK next year to see one. david
Joseph wrote on November 20, 2014 - 10:26pm Permalink
Great points.............I hope you will enjoy the new XE and please come back and share your thoughts!!