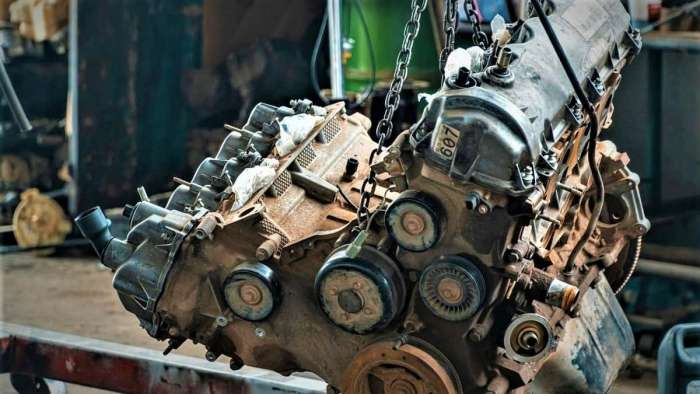 You have a new or special make of car you love, but the engine has exploded. Should you agree to having an engine swap as recommended by a mechanic or that guy in the office who says he knows cars? Here are some engine swapping considerations all car owners need to know and understand before agreeing to one and what could happen if you go for it. Plus, a bonus video of a V8 engine swap in a 1998 Honda Civic Hatchback doing a quarter mile in 10 seconds.
Advertisement

Because it is short and good example of anything is possible when it comes to cars and engine swapping, here is a crazy engine swap result of putting a V8 engine into a Honda Civic Hatchback and taking it on a drag strip for a timed quarter-mile run.

Back to Normal Engine Swapping

In most cases, it is almost never prudent to pay a garage to do an engine swap for your car when something nearly irreparable has happened to your car’s engine. For most car owners in this position, it’s typically a matter of an older used vehicle that while has served the owner well over the years, the normal wear and tear aging of everything else besides the engine just does not make good economic sense. The owner in this position would do better to spend his car budget on either a new or lightly used vehicle instead.

Related article: What a Used Toyota Engine Rebuild Can Cost

The exception to this is a practically new car that for whatever reason the engine exploded and even though under warranty, was not covered because the owner allowed someone to modify it in a way that voided its warranty.

One other exception---and more realistic---is when someone owns a special make and model of sports car or vintage wheels that goes beyond economics and is more about just how much a person loves his car.

Under both exceptions we are talking about swapping a damaged engine with the same type of a new or rebuilt matching engine (with a guarantee) for that vehicle. Swapping out a damaged engine with a lower mileage used engine (from a wreck for example) is risky and not advisable. Especially since some makes and models have engines that are known to have a high rate of engine rebuild history.

Related article: One Fatal Flaw That is Destroying Vehicles with Ford Engines

What Happened When a Jag Owner Agreed to an Engine Swap

What motivated this topic was a recent The Car Wizard YouTube video where the host and a special guest discuss what happened when the owner of a 2014 Jaguar agreed to an engine swap for his beloved sports car only to discover that even with the new engine, his car still had problems.

In this example, we learn that even when an engine is swapped out---it does not mean that a car owner’s problems are resolved. In fact, new problems can and will emerge. In this case, it was a matter of mechanic negligence resulting in a bad engine installation.

Here is the video in its entirety. Although the video breaks away from the engine swap problems after the first 12 minutes, the Car Wizard returns to some good points made toward the end of the video that makes watching (or skipping over the interior inspection) the video end-to-end worthwhile.

How could a shop do such a bad swap? CAR WIZARD points out all the errors on '14 Jaguar F-Type

Points About the Video

From the video, I would surmise that this was a case of a mechanic who was not organized when it came to all the nuts, bolt, screws and clips that come with an engine swap. Plus, there was a failure to ensure that everything was torqued as it should be; and, there was a problem with the wiring reinstallation (most likely one that required starting all over again with some phase of the engine swap) that led to a jerry-rigged repair or readjustment.

There are three take-home messages from this video:

(1) You must make sure that the mechanic doing the work has the expertise and experience of swapping your engine type. Ask for references. This is major mechanical work and best done only by a qualified mechanic who does this for a living.

(2) If you do have an engine swap done by a qualified mechanic, just like with buying a used car you should have the work inspected by another mechanic afterward who can catch any problems before they become a major issue. You would hope that the original mechanic has someone to look over the swap as a backup---but you never know.

(3) Engine swaps are never easy---even when it is done with an exact engine replacement or a recommended substitute engine. In the real world you can (and should) expect some problems will develop that will require some repeat visits or work done.

While the above was primarily about same engine-to-engine swapping, less conventional but reasonable (when possible) is to swap with a similar engine, but one with higher performance. On the far side of this spectrum is engine swapping with a totally different engine which may appeal to some car owners.

For a good explanation of why less-conventional engine swapping is not for the faint-hearted or those with a limited budget, here is an excellent video where an experienced mechanic and expert on swapping car engines explains all that can go wrong and special considerations that need to be made when thinking about swapping an engine.

The value of this video is that although he is primarily talking about non-conventional engine swapping, the same advice he gives applies quite often to same-engine swapping and what is involved.

So You Want to Swap Your Engine

For additional articles about engine problems, check out these two selected article about “Subaru Crosstrek Engine Oil Analysis After 3,000 Mile Test” and "Consumer Reports Analysts Reveal the Used Cars Most Likely to Need an Engine Rebuild and What to Buy Instead.”

COMING UP NEXT: 2022 Lexus IS Destined to Be Among the Best of the Last Modern ICE Vehicles