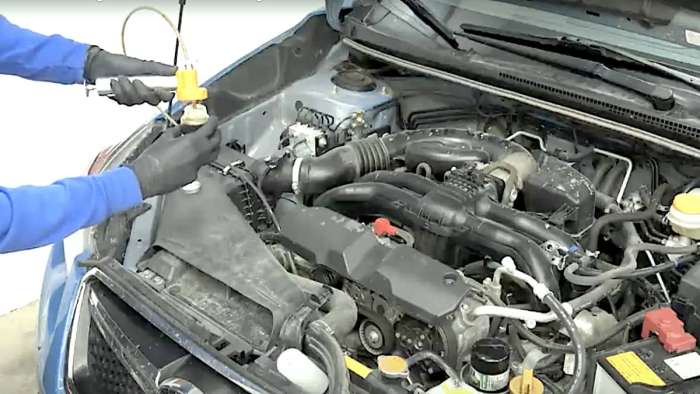 The Importance of a Thorough Inspection

In earlier articles we’ve learned the importance of having a vehicle inspected before deciding to purchase a used car regardless of who is selling it or where it came from---especially following this year’s recent hurricanes in which we can expect a number of flood damaged used cars to enter the used car market soon.

Deciding on the level of inspection you want to perform---or hire a trusted mechanic to do for you---is a matter of preference, time and budget. However, it is recommended to have your own used car inspection checklist and possibly even some relatively inexpensive diagnostic tools toward fleshing out any hidden problems that lie dormant in what appears to be a pretty good car for sale.

However, if you want to go into a more thorough level of inspecting your car (or a used car you are considering buying), you could do what tech heads, race car teams, and fleet managers do to monitor their vehicles’ health---having the engine oil analyzed.

Engine oil analysis is a useful tool in letting you know not only if an engine has an internal problem such as internal fluid cross-leaking, but can also alert you to a potential problem that could manifest later in the vehicle’s life.

It helps to think of this as being similar to having your blood clinically tested as a measure of your body’s health. Only, in this case, samples of oil are collected at various mileage points and chemically compared to see if anything is amiss within your engine’s operation.

While you can custom-choose any number of engine-related chemical indicators toward evaluating your engine oil, a basic $30 test will typically cover parameters such as:

• Additives in engine oils, such as the concentration of zinc, phosphorous, calcium and magnesium to ensure they remain consistent and not showing signs of experiencing cross-contamination.

• Engine metal wear breakdown, that includes the detection of iron, copper or tin as evidence of specific component wear that is excessive.

• Acid and base numbers to indicate whether the oil has been changed frequently enough.

• Levels of silicon and aluminum that indicate dirty air is leaking into the combustion chamber.

• Coolant leaking within the engine indicated by traces of sodium, potassium or boron in the oil.

The Benefits of Oil Analysis Testing

The benefits to having your oil tested is that not only can it reveal hidden or potential problems developing in an engine; but, that it is also a relatively non-invasive testing process due to it only requires periodic sampling of engine oil that is easily done without having to tear an engine down for physical inspecting.

That said, here is an informative video demonstration of engine oil analysis from a recent Engineering Explained You Tube channel that asks “How do you know if your engine is healthy?” while explaining the testing a Subaru owner did with his vehicle before and after a 3,000 mile road trip.

Does Your Engine Have Hidden Damage? How To Know!

For more used car articles related to the topic, be sure to check out the following linked article about what experts have this to say regarding whether you should pay more on synthetic oil for your oil change.

COMING UP NEXT: What makes Tesla cars so quiet?